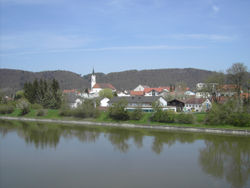 Marktl, or often unofficially called Marktl am Inn ("Little market on the river Inn"), is a village and historic market municipality in the state of Bavaria, Germany, near the Austrian border, in the Altötting district of Upper Bavaria. The most notable neighbouring town is Altötting. Marktl has approximately 2,700 inhabitants.

Marktl's coat of arms was lent to handing by Duke Ludwig on May 12, 1447. The boat operator hook is a symbol of navigation, which was once so important in the region. The caper measure is a symbol of grain trading and shipping. The Bavarian lozenges refer to the affiliation of the place with the Bavarian duchy.