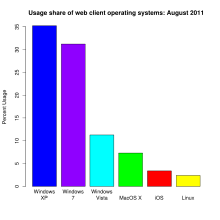 Different categories of computers use a wide variety of operating systems, and the usage share varies enormously from one category to another.

In some categories a single family of operating systems is dominant. For example, most desktop and laptop computers use Microsoft Windows and most supercomputers use Linux. In other categories, such as smartphones and servers, there is greater diversity and competition.

Information about operating system share is difficult to obtain. In most of the categories below, there is no reliable primary source or methodology for its collection.

There is little openly published information on the usage share of desktop and laptop computers. Gartner publishes estimates, but the way the estimates are calculated is not openly published. Also, sales may overstate usage. Most computers are sold with a pre-installed OS; some users replace that OS with a different one due to personal preference. Conversely, sales underestimate usage, by not counting pirated copies. For example, in 2009, "U.S. research firm IDC estimated that 80% of software sold in China last year was pirated." (Windows was mentioned, but no specific estimate for Windows was given.)[1] As another example, in 2007, the automated push of IE7 update onto legal copies of Windows, contrasted with web browser share statistics, led one author to "estimate that 25%–35% of all Windows XP machines are illegal".[2]

These are current-year sales estimates, not accumulative usage share for all PCs that are in use.

"A Gartner forecast calls for Mac OS to ship on 4.5 percent of new PCs worldwide in 2011 and 5.2 percent in 2015. Gartner does not expect Google Chrome OS, Google Android or HP's webOS to get 'any significant market share' on PCs in the next few years, and expects Linux operating systems to remain at less than 2 percent share over the next several years."[4]

In a speech to investors in February 2009, Steve Ballmer of Microsoft presented a slide based on Microsoft's research; while it showed no figures, the pie chart depicted Linux and Apple as each having roughly 5–6% of home and business PCs.[6]

Web client usage share (see below) is often used as a proxy for desktop share, but many desktops are not used for web access so do not get counted in these figures. The correlation between desktop share and web client share is also being challenged by mobile web access, which rose through 1% in 2009 and 4% in 2010.[7]

Microsoft's CFO Peter Klein stated in July 2010 that Windows 7 now runs on more than 15% of all PCs worldwide.[8] A Forrester Research study of desktop operating systems used in North American and European companies in 2010 found Windows 7 on 10% of all commercial desktops, Windows XP on 75% and Vista on 7%.[9]

In October 2010 Tim Cook of Apple claimed that 1 in 5 of desktop/laptop computers sold in the United States is a Mac.[10]

The following information on web clients is obtained from the User agent information supplied to web servers by web browsers. This is an inexact science for a variety of reasons. For a discussion on the shortcomings see Usage share of web browsers.

The most recent data from various sources published during the last six months is summarized in the table below. (All of these sources monitor a substantial number of web sites. Statistics that relate to a single web site are excluded.)

The netbook market has been dominated by Microsoft Windows, with Linux in second place.

Initially, Linux dominated the netbook market when Asus started it with the Eee PC in October 2007, but this lead did not last long. Asus and Acer, which accounted for 90% of the early netbook market, installed Linux on 30% of their machines.[24]

Microsoft responded by extending the life of Windows XP. By February 2009, Microsoft cited data from NPD Retail Tracking Service which showed that US market share of Windows on netbooks went from under 10% to 96%.[25]

According to DisplaySearch, netbooks and tablets rose from just under a 14% share of the overall portable computer market in third quarter of 2008 to around 20% in the second quarter of 2009, and remained at around 20% until the middle of 2010. During 2010, Apple's iPad tablet computer gained a 6.5% share of this market sector in the first quarter and DisplaySearch forecast this will rise to 30% in the second.[27]

2011 Sales and Estimates (millions of units):

Android: "Android media tablets have collectively taken 20% market share away from the iPad in the last 12 months."[29]

"Apple is set to increase its iPad shipments at a faster rate than previously expected in 2011 and beyond, causing the global media tablet market to exceed growth expectations during the next few years, according to data from information and analysis provider IHS. Apple will ship 44 million iPads in 2011; shipments expected to reach 120 million units in 2015. Apple is expected to account for 74 percent of media tablet shipments in 2011 and 43-44 percent in 2015."[30] 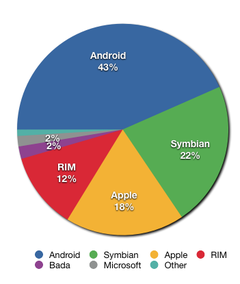 Share of worldwide 2011 Q2 smartphone sales to end users by operating system, according to Gartner.[31]

Mobile operating systems that can be found on smartphones include Nokia's Symbian, Apple's iOS, RIM's BlackBerry, Microsoft's Windows Mobile (marketed as Windows Phone) and its successor Windows Phone 7, Google's Android, Samsung's Bada, and HP's webOS. Android and webOS are in turn built on top of Linux, and iOS is derived from the BSD and NeXTSTEP operating systems. Linux, BSD, and NeXTSTEP are all related to Unix.

Server market share can be measured with statistical surveys of publicly accessible servers, such as web servers, mail servers[47] or DNS servers on the Internet: the operating system powering such servers is found by inspecting raw response messages. This method gives a good insight into market share of operating systems actually installed on those servers, however it only includes servers publicly accessible on Internet. 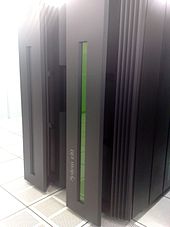 IBM System z has a 90-95% share of the mainframe computer hardware market.[56]

Operating systems for IBM System z generation hardware include IBM's bundled proprietary z/OS,[56] Linux on System z and as at October 7, 2008; 3 years ago (2008-10-07) the prototype OpenSolaris for System z.

Of Linux on System z, Red Hat and Novell compete to sell RHEL and SLES respectively. 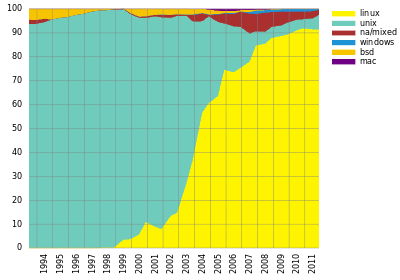 The TOP500 project lists and ranks the 500 fastest supercomputers that benchmark results are submitted for. It then publishes the collected data twice a year. The June 2011 figures are below.