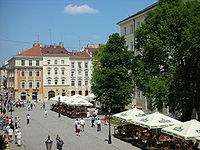 View of the northwestern corner of the Rynok Square 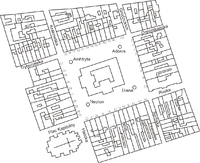 Plan of the Square

The Rynok Square in Lviv (Ukrainian: Площа Ринок, Polish: Rynek we Lwowie) is a central square of the city of Lviv, Ukraine. It was planned in the second half of the 14th century, following granting city rights by Polish king Casimir III, who annexed Red Ruthenia. The king ordered Lviv to be moved more to the south, where a new city was built to the plan of a traditional European settlement: a central square surrounded by living quarters and fortifications.[1] Old, Ruthenian Lviv had become a suburb of the new city.

The square is rectangular in shape, with measurements of 142 meters by 129 meters and with two streets radiating out of every corner. In the middle there was a row of houses, with its southern wall made by the Town Hall. However, when in 1825 the tower of the Town Hall burned, all adjacent houses were demolished and a new hall, with a 65-meter tower, was built in 1835 by architects J. Markl and F. Trescher.[2]

Around the square, there are 44 tenement houses, which represent several architectural styles, from Renaissance to Modernism. In the four corners, there are fountains—wells from 1793, probably designed by Hartman Witwer. The sculptures represent four Greek mythological figures: Neptune, Diana, Amphitrite and Adonis. In front of the Town Hall, there was a pillory. In 1998 the Market Place, together with the historic city center of Lviv, was recognized as a UNESCO world heritage site.[3]

The square was designed soon after Lviv’s location as a city. Originally, the buildings were Gothic; however, a great fire on 3 June 1527) destroyed most of the city. The new city, then known in Polish as Lwow, was rebuilt in Renaissance style, with a few remaining examples of Gothic architecture. There is a vault in tenement house number 24 and a portal in house number 25. The Rynok Square was witness to several important events in the history of Poland and Ukraine. Among these, in 1387 King Wladyslaw Jagiello accepted the homage of Petru I of Moldavia here. In 1436 another Moldavian ruler, Ilias of Moldavia, paid homage to King Wladyslaw III in Lviv. Also, at the pillory, several historical figures were executed, including rulers of Moldavia Ştefan Tomşa (1564), Ioan Potcoavă (Ivan Pidkova) (1577) and Iancu Sasul (1582).

In 1848, during the Spring of Nations, a Polish National Guard was formed here. On 11 November 1920, prime minister Jozef Pilsudski hosted a military parade to commemorate awarding the Virtuti Militari cross to the city. Also, on 30 June 1941, Yaroslav Stetsko proclaimed Ukraine's independence in a house located on the square. In 2006, a major restoration of the square’s pavement was carried out. 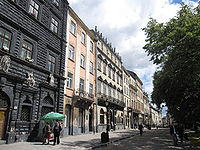 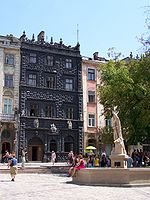 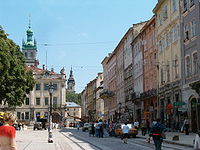 Southern side of the square

Number 22. A 19th century house, built on the site of an earlier one. 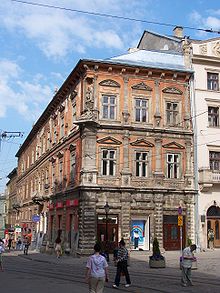 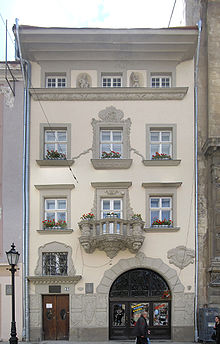 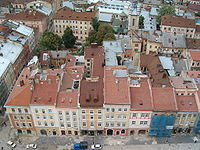 Northern side of the square, seen from the tower of the Town Hall 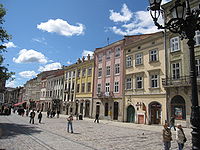 Northern side of the square

360º panorama of the Square