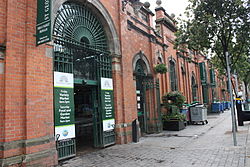 Market Quarter refers to a wide area of Belfast City including St George's Market, an area of inner city housing, The Waterfront precinct - including conference and concert hall and Hilton Hotel - and the city's Central Railway Station.

Belfast was founded on Market trade and "Market Quarter" pays homage to this history. The area once boasted 14 markets but today only St George's Market remains. St George's Market is one of Belfast’s oldest attractions. It was built between 1890 and 1896 and is one of the best markets in the UK and Ireland.

It has been voted for numerous local and national titles and awards for its fresh, local produce and great atmosphere.

It holds a weekly Friday Variety Market as well as the City Food and Garden Market on Saturdays. It also hosts a range of events throughout the year.

St George's Market is located across Oxford Street from Belfast's concert and conference centre, the Waterfront Hall and Lanyon Place, a commercial development including the Hilton Hotel and the BT Riverside Tower Head Quarters Building. St George's Market is separated by East Bridge Street from 'The Markets', the name given to an area of inner city housing, which itself is adjacent to a vacant site, formerly the city's Haymarket, and Belfast Central Railway Station.