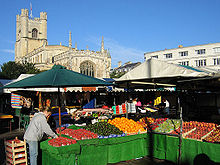 Market stalls in the Market Square, with Great St Mary's, the Cambridge University Church, in the background.

Market Hill (aka the Market Square) is the location of the marketplace in central Cambridge, England.[1][2] Operating as a marketplace since Saxon times, a daily outdoor market with stalls continues to run there.[3][4][5]

The market square commands a central location in Cambridge. It is connected via the following streets (clockwise from the north):

On the west side of Market Hill is Great St Mary's, the Cambridge University Church, with its tower on King's Parade. On the south side of the Market Square is the Cambridge Guildhall, built in the 1930s. To the southeast are the Grand Arcade and Lion Yard, two shopping centres.

The current Market Square was mainly filled with buildings originally and was not cleared until 1849 when a major fire occurred.[6]

The Market Place branch of Hobson's Conduit was completed in 1614. This branch brought fresh water to the Market fountain in the centre of the Market Place. Following the fire in 1849, the Market Square was redeveloped and in 1855 a Gothic Revival gabled fountain was erected (marked on many contemporary maps as "lavatory") and the original structure of Hobson's Conduit was moved to the corner of Lensfield Road and Trumpington Road in south Cambridge in 1856.[7] Most of the fountain was demolished in 1953. Flow to this branch was cut off in 1960 during construction of the Lion Yard shopping centre development and has never been restored.[8]