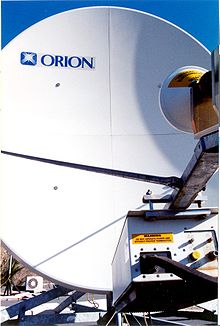 A very-small-aperture terminal (VSAT), is a two-way satellite ground station or a stabilized maritime Vsat antenna with a dish antenna that is smaller than 3 meters. The majority of VSAT antennas range from 75 cm to 1.2 m. Data rates typically range from 56 kbps up to 4 Mbps. VSATs access satellites in geosynchronous orbit to relay data from small remote earth stations (terminals) to other terminals (in mesh configurations) or master earth station "hubs" (in star configurations).

VSATs are most commonly used to transmit narrowband data (point of sale transactions such as credit card, polling or RFID data; or SCADA), or broadband data (for the provision of Satellite Internet access to remote locations, VoIP or video). VSATs are also used for transportable, on-the-move (utilising phased array antennas) or mobile maritime communications.

The concept of the geostationary orbit was originated by Russian theorist Konstantin Tsiolkovsky, who wrote articles on space travel at the turn of the century. In the 1920s, Hermann Oberth and Herman Potocnik, aka Herman Noordung described an orbit at an altitude of 35,900 kilometers whose period exactly matched the Earth's rotational period, making it appear to hover over a fixed point on the Earth's equator.[1]

Arthur C. Clarke contributed to the understanding of satellites through an article published in Wireless World in October 1945 titled "Extra-Terrestrial Relays: Can Rocket Stations Give World-wide Radio Coverage?". In this article, Clarke not only determines the orbital characteristics necessary for a geostationary orbit, but also discusses the frequencies and power needed for communications.

Live satellite communication was developed in the sixties by NASA,[2] named Syncom 1-3. It transmitted live coverage of the 1964 Olympics in Japan to viewers in the US and Europe. Soon after, on April 6, 1965 the first commercial satellite was launched into space, Intelsat I, nicknamed 'Early Bird'[3]

Most VSAT networks are configured in one of these topologies:

Constituent parts of a VSAT configuration

All the outdoor parts on the dish are collectively called the ODU (Outdoor Unit), i.e. OMT to split signal between BUC and LNB. The IDU is effectively a Modem, usually with ethernet port and 2 x F-connectors for the coax to BUC(Transmit) and from LNB (Receive). The Astra2Connect has an all-in-one OMT/BUC/LNA that looks like a QUAD LNB in shape and size which mounts on a regular TV sat mount. As a consequence it is only 500 mW compared with the normal 2W, thus is poorer in rain.

Maritime VSAT is the use of satellite communication through a VSAT terminal on a ship at sea. Since a ship at sea moves with the water the antenna needs to be stabilized with reference to the horizon and True North, so that the antenna is constantly pointing at the satellite it uses to transmit and receive signals.

Initially the use of VSAT antennas at sea was for transmission of television signals. One of the first companies to manufacture stabilized VSAT antennas was SeaTel of Concord, California which launched their first stabilized antenna in 1978. Sea Tel dominates the supply of two-way VSAT stabilised antenna systems to the marine market with almost 72 percent of the market in 2007 compared with Orbit’s 17.6 per cent.[4] Initially maritime VSAT was using Single Channel Per Carrier - SCPC technology - which suited large volume users like oil drilling rigs and oil platforms and large fleets of ships from one shipowner sailing within one or few satellite footprints. This changed when the company iDirect launched its IP-based Time Division Multiple Access (TDMA) technology that dynamically allocated bandwidth to each ship for shared bandwidth, lowering the entry level cost for getting maritime VSAT installed, which turned out to be of key importance to small-to mid-sized fleets, and thus to the market acceptance of VSAT.

Modern VSAT systems are a prime example of convergence, and hence require skills from both the RF and IP domains. VSAT specific training includes: