Power Rangers is a long-running American entertainment and merchandising franchise built around a live action children's television series featuring teams of costumed heroes. Produced first by Saban Entertainment, later by BVS Entertainment, and currently by SCG Power Rangers LLC, the series took its initial premise and much of its footage from the Japanese tokusatsu Super Sentai franchise. Its first entry, Mighty Morphin Power Rangers, debuted on August 28, 1993, and helped launch the Fox Kids programming block of the 1990s, during which it catapulted into popular culture along with a line of action figures and other toys by Bandai.[2]

Despite initial criticism for its action violence targeted to child audiences, the franchise has continued, and as of 2011[update] the show consists of 19 television seasons of 16 different series and two theatrical films. Creator Haim Saban regained ownership of the franchise in 2010 after seven years under The Walt Disney Company. The current season Power Rangers Samurai debuted in the United States on February 7, 2011.[3]

Since Power Rangers derives most of its footage from the Super Sentai Series, it features many hallmarks that distinguish it from other superhero series. Each series revolves around a team of young people recruited and trained by a mentor to morph into Rangers, able to utilize special powers and pilot colossal assault machines called Zords to defeat and overcome evil forces that threaten humanity. At the end of a series, Rangers sacrifice their weapons, Zords, or powers in order to defeat the lead villain they had fought during the series. For example in Mighty Morphin, alien wizard Zordon recruits "teenagers with attitude" to harness the power of the dinosaurs to overcome the forces of evil space alien Rita Repulsa.[4]

When "morphed" rangers become powerful superheroes wearing color-coded skin-tight battle suits and helmets with opaque visors. Each team's costumes are nearly identical aside from individual rangers' color and helmet design. Morphed Rangers generally possesses superhuman strength, durability, and ability in hand-to-hand combat. Some possess superhuman abilities such as super-speed or invisibility, attributes somewhat related to their Ranger abilities.[5] In addition, each individual ranger has a unique individual weapon as well as common weaponry used for ground fighting.[note 1] When enemies grow to incredible sizes, Rangers utilize individual Zords that combine into a larger Megazord.

Rangers teams operate in teams of five or three, with more Rangers joining the team part way into each season. Each team of Rangers, with a few exceptions, obeys a general set of conventions, outlined at the beginning of Mighty Morphin and implied by mentors throughout many of the other series: Power Rangers may not use their Ranger powers for personal gain or for escalating a fight, nor may the Power Rangers disclose their identities to the general public.[note 2] The penalty for disobeying these rules, at least in Mighty Morphin Power Rangers, would be the loss of their power.

As in Super Sentai The color palette of each Power Rangers team changes every series.[note 3] Only Red, Blue, and Yellow appear in every Ranger team. The most common color that does not appear every year is Pink, followed by Green, Black, and White. Other colors and designations also appear throughout the series.[note 4] A Rangers' color designation also influences their wardrobe throughout the series: civilian clothing often matches Ranger color.[note 5]

Production of Power Rangers episodes involves extensive localization of and revision of original Super Sentai source material in order to incorporate American culture and conform to American television standards. Rather than making an English dub or translation of the Japanese footage, Power Rangers programs consist of scenes featuring English-speaking actors (either from the United States, Canada, Australia, New Zealand, or the United Kingdom) spliced with scenes featuring either Japanese actors dubbed into English or the action scenes from the Super Sentai Series featuring the Rangers fighting monsters or the giant robot (Zord and Megazord) battles with English dubbing. In some series, original fight scenes are filmed to incorporate characters or items unique to the Power Rangers production. Like many of Saban Entertainment's previous ventures in localizing Japanese television for a Western audience, the plot, character names, and other names usually differ greatly from the source footage, though a few seasons have stayed close to the story of the original Super Sentai season.

The series that began the franchise, Mighty Morphin Power Rangers (an American adaptation of the 1992 Japanese Super Sentai Series, Kyōryū Sentai Zyuranger), began broadcasting as part of the Fox Kids block of programing that aired on the Fox network. It lasted for three seasons (from 1993 to 1996).[6]

Saban Entertainment distributed the Power Rangers series from 1993 until the end of 2001, and Fox broadcast it until the fall of 2002. The Walt Disney Company purchased the franchise as a part of a buyout that took place in 2001.[1][6][7][8] This resulted in Fox Family Worldwide becoming ABC Family Worldwide Inc.[8] This buyout also saw Saban Entertainment becoming BVS Entertainment, from News Corporation, Fox's parent company, and Haim Saban.[8] The show continued to air on Fox until the company replaced its Fox Kids package with "FoxBox" in the United States. Since September 2002, all Power Rangers shows have aired on various Disney-owned networks (ABC Kids, Toon Disney and Jetix channels worldwide).[6] ABC Family, another Disney-owned network, also used to air Power Rangers until it did away with its Jetix timeslot after August 31, 2006. On February 12, 2009, Toon Disney ended in the wake of Disney XD, ending cable airings of Power Rangers in certain areas of the United States. Several ABC affiliate broadcasting groups, most notably Hearst-Argyle Television and Allbritton,[citation needed] have declined to air most of the Power Rangers series since 2006 due to the lack of FCC-compliant educational and informational content in the programs.[9]

An article in The New Zealand Herald published on March 7, 2009 identified Power Rangers RPM as the last season of the Power Rangers run. Production manager Sally Campbell stated in an interview, "...at this stage we will not be shooting another season."[10][11] A September 1, 2009, revision to Disney A to Z: The Official Encyclopedia by Disney's head archivist Dave Smith states that "production of new episodes [of Power Rangers] ceased in 2009".[12] Production of Power Rangers ceased and the last[update] series by BVS Entertainment, RPM, ended on December 26, 2009.[10]

On October 1, 2009, Bandai released a press release that Disney would re-broadcast Mighty Morphin Power Rangers starting in January 2010 on ABC Kids in lieu of a new series utilizing footage from the 2009 Super Sentai television series. A new toy line accompanied the series and appeared in stores in the later part of 2009.[6][13][14] ABC's over-the air telecasts ended on August 28, 2010, and turned the hour back to affiliates.

On May 12, 2010, Haim Saban's Saban Brands bought back the Power Rangers franchise from Disney for $43 million[15][16] [17] and announced plans to produce a new season of the television series. The nineteenth season Samurai began airing on Nickelodeon February 7, 2011,[16][18] with the previous episodes beginning rebroadcast on Nicktoons later that year.[18][19][20] It was also announced that Saban plans to make a new Power Rangers movie.[21]

The first series Mighty Morphin Power Rangers'' through In Space followed a story arc with a gradually changing cast and characters over six years.[note 6] Beginning with Lost Galaxy, although it had ties with the previous story arc, each Power Rangers series had its own self-contained storylines, independent of previous series. Crossover episodes between different series featuring rangers, villains, and other other characters from past seasons also began with Lost Galaxy.[note 7] 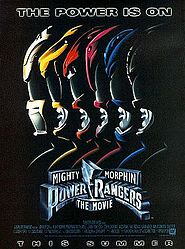 The Power Rangers series has also generated two theatrical films, both distributed by 20th Century Fox. As of 2010[update], Fox's home entertainment division, long after Fox's parent company News Corporation and Haim Saban sold Fox Family (currently ABC Family), including Saban Entertainment and the Power Rangers franchise, to the Walt Disney Company, still maintains worldwide home-entertainment rights to both of these Power Rangers films. However, with the sale back to Saban, Paramount Pictures, part of the Viacom family of properties that includes Nickelodeon, could take over future video distribution rights.

Power Rangers has long had success in international markets and continues to air in many countries, with the exception of New Zealand, where the series filming takes place as of 2009[update]. As of 2006, Power Rangers aired at least 65 times a week in more than 40 worldwide markets.[24] Many markets carry or have carried the series on their respective Fox or later Jetix/Disney XD channels or have syndicated the program on regional children's channels or blocks, either dubbed into the local language or broadcast in the original English. Since the 2010 acquisition by Saban Brands, international television distribution rights for Power Rangers have been managed by MarVista Entertainment.[25][26][27]

Broadcast in East Asian territories has been treated differently than in other international markets due to the prevalence and familiarity of 'the Super Sentai brand originating in Japan. In Japan, many Power Rangers television seasons and movies were dubbed into Japanese for television and video with the voice actors often pulled from past Super Sentai casts, leading to the English-dubbed action sequences being "re-dubbed" or "restored" back to Japanese as well. Power Rangers SPD is the latest season to be broadcast in Japan on Toei Channel in August 2011, with the Dekaranger cast voicing their counterparts.[28] After broadcast of Power Rangers ended in South Korea with Wild Force, Bandai of Korea started airing dubbed Super Sentai series under the 파워레인저 (Power Ranger) brand on JEI TV. Some seasons of Super Sentai broadcast in South Korea have similarly named titles as their American counterparts, such as Power Ranger Dino Thunder[29] for Abaranger in 2007 and Power Ranger S.P.D.[30] in place of Dekaranger.

As of October 2009[update], 33 Power Rangers DVD collections have been released in the United States:

Internationally, additional DVD releases have occurred (such as Lightspeed Rescue, Time Force and Wild Force in Germany) and as free DVDs attached to the Jetix magazine, published in the UK. Mighty Morphin Power Rangers Season 1, Season 2, and Season 3, Power Rangers Zeo, Power Rangers Turbo, and Power Rangers In Space have been released in Germany as well in both English and German, with Power Rangers Lost Galaxy only in German.[37][38][39][40][41][42][43] Additionally, Ninja Storm, Dino Thunder, S.P.D., Mystic Force, and Operation Overdrive saw complete boxset releases in the UK.[44][45][46][47][48] In France, Mighty Morphin Season 1 and Season 2 have been released in their entirety in 5 episode DVD volumes, and the first 25 episodes of Season 3 were released in May 2008.[49] In Italy, Mighty Morphin, Zeo, Dino Thunder and S.P.D. have appeared in their entirety. Zeo and S.P.D. were made available as commercial DVDs, while Mighty Morphin and Dino Thunder were issued as bi-weekly volumes at newsstands.