Mario Marathon began in 2008 when Brian Brinegar, a 29 year old web developer in Lafayette, Indiana, was inspired to start a Super Mario video game marathon after watching a group of college students who attempted to complete all four of the 3-D Zelda games in a 48 hour time period. Over a period of 57 hours starting on June 27, Brian Brinegar, Dan May, and John Groth raised $11,767.00 for Child's Play Charity.[5] Later that year, they teamed up with the Four48 group who inspired the original Mario Marathon. Together they held the Zelda Marathon, raising $2,477.00.[6]

The second year of Mario Marathon began on July 10, 2009. Chris "SlouchGuy" Deckard expanded the player roster to take the place of Dan May, who was out of the country.[7] The event raised $29,082.76[8] and lasted over four days.[9] It was also the first year that Mario Marathon started to finish various Mario games at 100% completion.[7]

A Mario Marathon for 2012 has been confirmed, but no set date has yet been announced[15]. 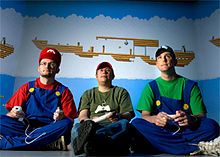 There are a number of recurring members of the Mario Marathon team. The players trade off on a game-to-game basis. The supporting cast keeps up with donations and crowd interaction. The list below are participants who have appeared in at least two or more Mario Marathons:[2]

To break up the monotony of playing games for upwards of 100 hours, the participants started performing special dances for the viewers. These events were commonly the dance associated with the Super Mario Super Show. In 2011, the team implemented the Wheel of Awesome. For every $1,000 donated, a random event is chosen that the participants must perform. While the Super Mario Super Show dance was included on the wheel, other events such as Blindfold Mode were included.

Zoe, known as Couch Dog, is the unofficial mascot of the Mario Marathon. In Mario Marathon 2, the participants set up a camera that focused on Zoe. This became so popular that they used this camera to drive donations.[citation needed]

In 2010, the Couch Pig was brought upon the stream. This large ceramic piggy bank became a fixture of the later stages of the marathon. Certain donation amounts would allow the Couch Pig to be place on the couch, while other donations would revoke those privileges. In 2011, Love Seat Pig, a smaller replica Couch Pig was raffled off for donations.

To keep the stream civil and child-safe, the Mario Marathon team conforms to a list of rules[16]: