Marino (Marinum or Castrimoenium in latin, Marini in local dialect) is an Italian city and comune in Lazio (central Italy), on the Alban Hills, Italy, 21 km south east of Rome, with population of 37,684[1] and a territory of 26.10 km2[2]. It is bounded by other communes, Castel Gandolfo, Albano Laziale, Rocca di Papa, Grottaferrata, and Ciampino.[3]

Marino is famous for his white wine, and for the connected Grape Festival, being celebrated since 1924. 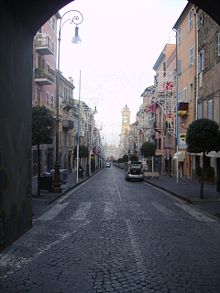 View of the city.

The territory of Marino was inhabited by Latin tribes from the 1st millennium BC. The ancient cities of Bovillae (Frattocchie), Mugilla (Santa Maria delle Mole, a frazione of the comune of Marino) and Ferentum (Marino itself) were part of the Latin League. Under the Roman Republic it was a summer resort for Roman patricians, who built luxurious villas in the area to escape the heat of Rome.

In 846 AD Bovillae, until then the largest settlement, was destroyed by the Saracens, and the population moved to the more easily defendable area of Ferentum, which was fortified under the new name of Marinum. From 1090 it was a dominium of the Counts of Tusculum, and later a fief of the Frangipane and, beginning in 1266, the Orsini. In 1272 San Bonaventura founded here the first confraternity of Italy.[4]

In 1347 it was besieged in vain by Cola di Rienzo. Fifty years later it was the site of the battle between Alberico da Barbiano and the French troops supporting Antipope Clement VII. In 1419 it was bought by the Colonna, who maintained it until 1914.

Marino hosted famous historical figures, from Charles VIII of France to Alfonso II d'Este and many others. Vittoria Colonna was born in Marino in 1492 and lived there part of her life. In 1571 Marino's people welcomed Marcantonio Colonna, a protagonist of the Battle of Lepanto, with a triumph, remembered yearly by a festival.

On February 2, 1944, during World War II, Marino was heavily bombed by USAAF B-25 (Mitchell) aircraft from the US XII air force. 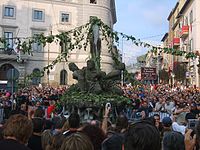