The Mariners' Church is a former Church of Ireland church located in Haigh Terrace, near the centre of Dún Laoghaire town, southeast of Dublin city. It now houses the National Maritime Museum of Ireland.

The church was built by subscription in 1836, in pursuance of a donation of £1000 for its endowment, for seafarers as the "Protestant Episcopal Mariners' Church at Kingstown Harbour".[1] Due to the increasing importance of Kingstown (as the town was then known) and its harbour, it was considered necessary to have a Church to look after the spiritual needs of officers and sailors. The church, designed by the architect Joseph Welland (1798-1860), was opened in 1837. This initial build consisted of just the nave and transepts. Richard Brooke, the first chaplain, described it as "large and gaunt, lofty and ugly". From 1862 until 1867, the building was improved by the addition of the spire and lancet windows. The spire, designed by Raffles Browne, was added in 1865.[2] The chancel was added in 1884. It was then the principal Church of Ireland church in the town. It depended for its upkeep to a large extent on voluntary subscriptions, donations, bequests and the results of fund-raising efforts.

Much-needed renovations were carried out in 1870, after several fund-raising efforts by the parishioners. However, further work was needed by 1884, to be carried out by Bolton of Rathmines under the direction of architect Thomas Drew (1838-1910). During this work, an accident occurred on 10 September. Scaffolding collapsed when two men were plastering the ceiling, 50 feet (15.2 m) above ground. One, Hemp, died soon afterwards; the other was seriously injured. The church re-opened on 14 October 1884.[3]

In the mid-20th century, the congregation dwindled, and the church closed in 1971. In 1974, the Church of Ireland and the Maritime Institute of Ireland signed an agreement that led to the museum's opening. 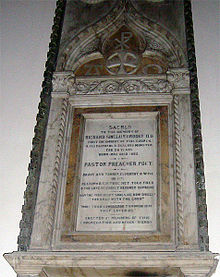 Memorial in the church to Richard Brooke.