The Marine Operations Force (Abbreviation: MOF; Malay: Pasukan Gerakan Marin; PGM) is the Marine Police division of the Royal Malaysia Police tasked with maintaining law and order and coordinating search and rescue operations in the Malaysian Maritime Zone and on the high seas. The Marine Police serves under the control of the Malaysian Internal Security Department and Public Order with the role of safeguarding the security of Malaysian waters from any threats.

Following the Inspector General of Police Order B112, the functions of Marine Operations Force are;

The Marine Police used to be known as the Malay Water Police and its responsibility was to maintain security in Penang and the Straits of Johor. Owing to the increase in marine activities, the marine police was formed on September 1, 1947 in Batu Uban, Penang before being transferred to Gelugor, Penang with 19 boats contributed by the Customs Development and the Royal Malaysian Navy Reserve with 90 personnels.

During the Malayan Emergency, three members of the marine police perished in the battle of Bukit Kepong while fighting against the Communists.

During the Indonesia–Malaysia confrontation, the marine police also played a role in the crisis. The marine police co-operated with the navy in patrolling the coastal and riverine areas of the Malaysian Peninsula. Indonesian Irregular forces tried to infiltrate into Malaysia over water, especially using fishing boats and trawlers but many were successfully captured by the navy and the marine police. Some of the Indonesian Irregulars were shot dead when trying to escape from the Malaysian security forces, as well as having their weapons and equipments captured.

With the rapid development of Malaysia, the Marine Police expanded in terms of logistics and men. The expansion was notable during the 1960s, with a marked increase of 40 wooden PX class patrol boats and the addition of personnel. Subsequently, the duties of the Marine Police also expanded.

In 6 February 2009, the name of Malaysian Marine Police was changed to Pasukan Gerakan Marin (English: Marine Operations Force) with the aim of making the force more sensitive, progressive and innovative in their service to the community. The renaming was launched by the Minister of Home Affairs, Dato' Seri Syed Hamid Albar at PULAMAR (Abbreviation of Pusat Latihan Marin or Marine Police Training Centre), Tampoi, Johor Bahru and witnessed by Tan Sri Musa Hassan, the Inspector General of Police, the Director of Internal Security and Public Order, Dato' Hussin Ismail and all senior police officers and Malaysian media. In addition to functioning as regular police stations and huts, the Marine Police also took over police shacks located on islands, lakes, coastal and river areas. On November 24, 2008, a total of 41 marine police bases in the country were upgraded to Beach Police Stations and Beach Police Shacks.[1] 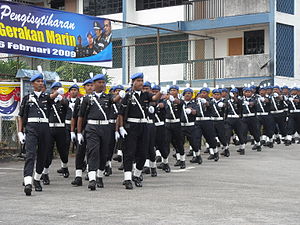 The marine police march during the declaration of PGM in 6 February 2009. The officers are wearing skyblue berets, the new berets of the unit and carried the M16 rifle.

The Marine Operations Force is currently headed by Senior Assistant Commissioner II Dato' Isa bin Munir. It operates from five regional bases around the peninsula and East Malaysia. It also has a police base at Putrajaya for the security of the lake. Each of these regional bases are organised similarly to the Neighbourhood Police Centres of the land divisions, and conduct patrols within its respective maritime sectors.

The Marine Police is organised into five main bases:

Northern Region Marine Police (Region 1)
Based at Batu Uban, Penang. Has responsibility for the maritime activities in the states of Perlis, Penang, Kedah, Perak and Selangor

South Region Marine Police Force (Region 2)
Based at Tampoi, Johor Bahru, Johore. Has responsibility for the maritime activities in the states of Negeri Sembilan, Malacca and Johore

East Region Marine Police Force (Region 3)
Based at Kemaman, Terengganu. Has responsibility for the maritime activities in the states of Kelantan, Terengganu and Pahang

Sabah Region Marine Police Force (Region 4)
Based at Sandakan, Sabah. Has responsibility for the maritime activities in the state of Sabah and Labuan

Sarawak Region Marine Police Force (Region 5)
Based at Kuching, Sarawak. Has responsibility for the maritime activities in the states of Sarawak 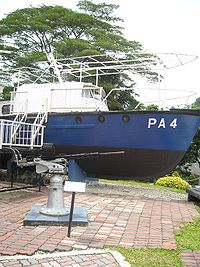 This team is responsible in patrolling Malaysian Territorial Waters (MTW), Exclusive Economic Zone (EEZ) and Contiguous Zone. Headed by Marine Police Commander centered at Major Police Headquarters at Bukit Aman, Kuala Lumpur and fully responsible to Inspector-General of Police through to Director of Internal Security Department and Public Order in every aspects of administration and operations.

The major duties are:-

The PGM conducts round-the-clock patrols in MTW from its five regional bases, in an area of more than 142, 393 km² and 450, 233 km² for EEZ as well as 4490 km for coastline. It is also responsible for maintaining law and order on most of Malaysia's islands.

While piracy was the main source of concern leading to the establishment of the Marine Police, it has become almost a non-issue today with no cases of piracy in Malaysian Territorial Waters in the last decade. Crimes in the offshore islands or in the waters are also markedly low.

August 22, 2005: A hijacked ship belonging to a Hong Kong citizen has entered the Straits of Malacca, after investigation, the ship was actually reported missing in 2003 in the waters Batam, Indonesia. At first, the ship will be detected by the Marine Operations Force. Marine Operations Force received information at about 9.00 am yesterday that the ship MV Natris trusted and has changed its name to MV Paulijing enter the Straits of Malacca and was on his way from Khandra, India to Port of Ho Chi Minh City, Vietnam. Responding on information, the Marine Operations Force have sent four marine police patrol vessels which were approaching the ship at about 10 am yesterday, ordered the captain of the ship was to stop. However, the captain of the MV Paulijing refused to heed to the order and continued to head south.

At the same time, five officers and 32 members of 69 Commando counter-terrorist operators was flown to Kukup, Pontian, Johore at about 5 pm yesterday. From Sultan Ismail Airport, Senai, the unit brought by helicopter and they were briefed by the Deputy Superintendent of Police Mohd Yazib Bin Abd Aziz. At 11 pm, Marine Operations Force and 69 Commando to Pulau Pisang and ready to respond at the appropriate time until at about 3:20 am of 69 Commandos and the Marine SWAT unit managed to board and capture the ship.

After inspection of the ship is carrying soybeans and a substance believed to vinegar. The ship was also carrying 19 crew and a captain of the Chinese citizens who are between the ages of 20 to 45 years. The ship was then taken to the waters off Tanjung Piai for further examination and report. This operation has been reported in the 999 program on TV3 in 2005 ago.[4][5]

Over the period 2005 to November 2008, PGM was successful in 12,054 cases of busts and summons above various type of offence in beach coastal and national waters.

Statistic of Arrested and Summons from 2005 to November 2008

All officers and men of the PGM are equipped with the Smith & Wesson Model 15 .38 Special service revolver, similar to their counterparts in land divisions, as their primary side weapon. The Beretta 92, Browning Hi-Power Mk.3, Glock 19, Heckler & Koch USP and Walther P99 service pistol is also issued to PGM officers and UNGERIN squad. Other firearms such as the Heckler & Koch MP5, the M16 rifle are also stowed aboard each patrol craft, with the M4 carbine and Remington 870 pump action shotgun as an additional weapon for the UNGERIN. Mounted on the boats themselves, are weapons such as the 7.62mm FN MAG General Purpose Machine Gun, and the 12.7mm M2 Browning machine gun, depending on the type of craft.

Currently, the PGM utilised the 15 PZ class patrol boats, 33 PX class, 68 PA/PT/PC/PLC and 4 PSC/PGR/PAR class patrol boats. From two current base during established, currently the branch have 5 the main base, 11 small base and 24 forward base.

A special operations squad of marine police was established to counter various terrorism threats. Known as UNGERIN, they received special training by the United States where they were trained in the specific doctrines to increase the security of Malaysian waters. The UNGERIN were provided with US special firearms, similar to those used by US counter-terrorist units.