Depending on the source, Officer Candidates go through either a 10-week, or two 6-week courses over separate summers, designed primarily to screen and evaluate candidates' fitness to lead Marines by placing them in leadership positions in a stressful environment. Students are evaluated during 2-3 day garrison command billets at the company and platoon level, and squad and fire-team level tactical billets during field exercises.

Prior to World War I, Marine officers came primarily from the Naval Academy, or were commissioned from the enlisted ranks. But as the Marine Corps expanded, it needed its own training pipeline for officers. OCS traces its roots to the "School of Application", established in 1891 in Washington, D.C. With the expansion of the Marine Corps for World War I, all instructional efforts were consolidated in MCB Quantico, where they remain today.

OCS is currently located at Brown Field at Marine Corps Base Quantico. The Platoon Leaders Class Juniors was at Camp Upshur until 1986, but was subsequently consolidated with the seniors at Brown Field.

Officer Candidates must pass a series of tests before being admitted into the Officer Candidate School.[2] An Officer Selection Officer, usually a Captain, meets with a prospective Officer Candidate. Upon completing a satisfactory interview, the OSO then makes the decision to move the prospective candidate onto the next step. The prospective candidate then must complete a short essay about why they want to be a Marine Officer, provide identification (usually a birth certificate and Social Security card), pass a background check, provide five letters of recommendation, and complete a physical medical exam.

After successful completion of these steps, the OSO may then conduct the Officer Candidate through a Physical Fitness Test. Upon reaching a score on the test that the OSO deems to be acceptable (usually in the range of 225 and above), the Officer Candidate then signs their contract (including their contract to attend the course, the fraternization policy acknowledgement and the Marine Corps drug policy acknowledgement). Candidates choose to enter the program as either a ground, air, or law contract. 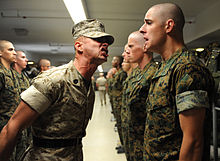 OCS screens potential officers using a program designed to test and assess the candidates with an emphasis on confidence and leadership abilities. This includes evaluated events such as the leadership reaction course and small unit leader evaluation exercise.[3]

Regardless of course, the instructors usually include officers to handle most academic instruction, enlisted sergeant instructors (Staff Noncommissioned Officers taken from the drill instructor community) to conduct most of the day-to-day management, and other instructors (most often non-commissioned officers) to teach most field skills. Officer Candidates on both courses have many related expenses (including travel to and from Officer Candidate School, meals, and lodging) paid for them, and receive a stipend while in training to pay for uniforms, books, and other supplies. The Training and Education Command designs the program of instruction for OCS.

The Platoon Leaders Class normally consists of two six-week training sessions taken between consecutive school years, which occur in the summers with no commitment during the school year. Young men and women at any accredited four-year college or university are eligible for this class.

Those that opt for the Juniors/Seniors program will find that the divided program is tailored to provide progressive training. The Junior course is an introduction into the Marine Corps, and allows the candidates to be evaluated and motivated for their possible commission. Physical training, small unit leadership, and basic infantry tactics are addressed, as well as significant academic instruction. PLC Seniors is an advanced course of indoctrination and contains similar physical training, small unit leadership, infantry tactics, and academics; but at a faster rate and with more instructor-induced stress. Those candidates that opt for the combined course cover the same areas of instruction, but it is integrated without the need to reevaluate candidates due to a year-long gap. NROTC midshipmen attend the PLC Seniors course for their final summer cruise, nicknamed "Bulldog".

The main alternative is the Officer Candidates Course, which is designed for college seniors or graduates and enlisted Marines, and consists of one ten-week training session. While the curriculum is identical to the 10-week PLC Combined session, OCC is held three times a year (winter, summer, and fall), and accepts only college graduates. Additionally, graduates of OCC are commissioned immediately upon graduation of OCS.

The Quigley is a legendary water obstacle used in training at OCS.[4] Lieutenant Colonel William J. Quigley, a veteran of both the Korean and Vietnam Wars, designed it in 1967. It consists of a long canal with 4-foot (1.2 m) cement culverts submerged in swampy, snake infested water; candidates must swim through the Quigley as a part of the OCS training program.

Officer candidates who complete OCS (and have obtained their college degrees) are then commissioned as Second Lieutenants and sent to the The Basic School (TBS) at Quantico for six months of further training with other newly commissioned Marine officers from all other commissioning programs. At TBS, they receive the skills and knowledge necessary to lead Marines in combat; much like "every Marine is a rifleman", every officer is introduced to the skills necessary to lead a provisional rifle platoon.