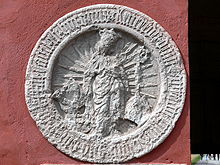 Mariefred Charterhouse, sometimes referred to as Gripsholm Charterhouse (Swedish: Mariefreds kloster, Latin: Monasterium Pacis Mariae or Pax Mariae[1]), was a Carthusian monastery, or charterhouse, in the present town of Mariefred in Södermanland, Sweden, to which it gave its name; before the building of the monastery the place was known as Gripsholm. It was the only Carthusian monastery in Scandinavia[2], and one of the last monasteries established in Sweden before the Reformation.

The establishment of a Carthusian monastery in Sweden was brought about by the efforts of Jakob Ulvsson, Archbishop of Uppsala, and Kort Rogge, Bishop of Strängnäs, who in 1493 persuaded Sten Sture the elder, Regent of Sweden, to have the monks Fikke Dyssin and Johannes Sanderi together with two lay brothers sent from the Marienehe Charterhouse near Rostock to Sweden for a meeting with the riksrådet (Privy Council of Sweden). Later that year Sten Sture enfeoffed the Carthusians with the Gripsholm estate in Selebo härad in Södermanland and in 1502 gave them other lands round about. 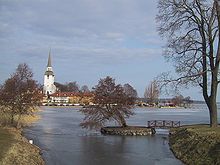 The present parish church of Mariefred, on the site of the former charterhouse

In 1498 the lay brothers set up a printing press. The only book now known from this press is a tract for an ecstatic devotional movement based on the veneration of the rosary, the "Brotherhood of the Psalter of the Virgin Mary". This was distributed across the whole of Europe, and had a powerful effect on the devotional life of late medieval period.

Mariefred Charterhouse was short-lived: in 1526 it was one of the first monasteries secularised by Gustav Vasa. In December 1525 he claimed its assets from the heirs of Sten Sture the Elder, who had given the estate to the monastery on the condition that it should pass to the right heirs of the monastery if it were ever wound up. This claim was legitimated by the Privy Council in January 1526.

Virtually no trace of the monastic buildings now remains above ground: Gustav Vasa had them dismantled for the construction of Gripsholm Castle. A cellar and a few traces of walls have been discovered to the south of the church. A small collection of stones discovered during excavations in the monastery grounds, is in the church tower.

In the chapter entitled Utveckling ("Development") in his book Svenska öden och äventyr August Strindberg describes the monks calling in an artist to paint an altarpiece for the newly-built monastery.