Princess Marie of the Netherlands

Princess Marie of the Netherlands

Princess Marie suffered at an early age of hearing problems and like her sister Louise, she was considered unattractive. Her parents hoped to marry her to Albert Edward, Prince of Wales (later King Edward VII). Edward's mother, Queen Victoria, originally a supporter of the match, blew off the plan after meeting her and found her unattractive. 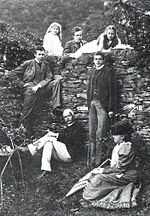 Marie with her family

They had six children: