Princess Marie Amélie Françoise Hélène d'Orléans (13 January 1865, Ham, near Richmond, Surrey – 4 December 1909, Copenhagen) was a French princess by birth and a Danish princess by marriage. She was politically active.

Marie was the eldest child of Robert, duke of Chartres (the second son of Ferdinand Philippe, Duke of Orléans and Duchess Helena of Mecklenburg-Schwerin) and his wife, Princess Françoise d'Orléans. Françoise was the daughter of François d'Orléans, prince de Joinville and Princess Francisca of Brazil.

Born during the reign in France of her family's rival, Napoléon III, she grew up in England, were her family had moved in 1848. She moved to France with her family after the fall of Napoleon in 1871. She defined herself as “une bourgeoise”.

She married Prince Valdemar of Denmark, the youngest son of Christian IX of Denmark, after the consent of the pope, on 20 October 1885 in a civil ceremony in Paris and again in a religious ceremony in the Château d'Eu two days later. She remained a Roman Catholic, he a Lutheran. They adhered to the dynastic arrangement usually stipulated in the marriage contract in such circumstances: sons were to be raised in the faith of their father, daughters in the denomination of their mother.

The couple took up residence in the castle of Bernstorff in Copenhagen, in which Valdemar had been born. Since 1883, Valdemar had lived there with his nephew and ward, Prince George of Greece, a younger son of Valdemar's elder brother, Vilhelm, who had become king of the Hellenes in 1863. The king had taken the boy to Denmark to enlist him in the Danish navy, and consigned him to the care of his brother, Valdemar, who was an admiral in the Danish fleet.

Feeling abandoned by his father on this occasion, George would later describe to his fiancée, Princess Marie Bonaparte, the profound attachment he developed for his uncle from that day forward.[1]

It was into this household and relationship that Marie came to live. In 1907, when George brought his bride to Bernstorff for the first family visit, Marie d'Orléans was at pains to explain to Marie Bonaparte the intimacy which united uncle and nephew, so deep that at the end of each of George's several yearly visits to Bernstorff, he would weep, Valdemar would take sick, and the women learned the patience not to intrude upon their husbands' private moments.[2]

On this and subsequent visits, the Bonaparte princess found herself a great admirer of the Orléans princess, concluding that she was the only member of her husband's large family in Denmark and Greece endowed with brains, pluck, or character. Marie, in addition to her duties as mother and royal hostess, painted. During the first of these visits, Valdemar and Marie Bonaparte found themselves engaging in the kind of passionate intimacies she had looked forward to with her husband who, however, only seemed to enjoy them vicariously, sitting or lying beside his wife and uncle. On a later visit, George's wife carried on a passionate flirtation with Prince Aage, Valdemar's eldest son. In neither case does it appear that Marie objected, or felt obliged to give the matter any attention.[3]

George criticized Marie to his wife, alleging that she was having an affair with his uncle's stablemaster. He also contended that she drank too much alcohol, and could not conceal the effects. But Marie Bonaparte found no fault with Marie d'Orléans, rather, she admired her forbearance and independence under circumstances which caused her bewilderment and estrangement from her own husband.[4]

She was described as impulsive, witty and energetic and eased things up at the stiff Danish court. She never fully learned to speak Danish. The marriage was friendly. She gave her children a free upbringing, and her artistic taste and Bohemian habits dominated her household. In 1886, Valdemar declined the throne of Bulgaria with her consent. She was informal, believed in equality and was not snobby, and performed her ceremonial duties in an unconventional manner, and once wrote: "I believe that a person, regardless of her position, should be herself" (1896). She was an independent character with firm opinions, and showed this both privately and publicly. She liked both to ride and to drive and was known for her elegance. She was the official protector of the fire brigade and let herself be photographed in a fire brigade uniform, which was caricatured, and as a support to her spouse's career as a marine, she had an anchor tattooed on her upper arm. She once said regarding the complaints of her unconventional manners: "Let them complain, I am just as happy nevertheless".

She had asked the permission of the court to leave the house withouth a lady-in-waiting, and she had mainly spent her time with artists. She painted and photographed and was a student of Otto Bache and Frants Henningsen. She participated in the exhibitions on Charlottenborg 1889, 1901 and 1902 and was a member of the Danish Arts Academy.

She refused to obey the expectation on royal women to stay away from politics. She belonged to the political left and participated in convincing the king to agree to the reforms of 1901, which led to an appointment of a Venstre government,[5] and the de facto introduction of parliamentarism. In 1902, she rejected the idea to leave the Danish West Indies to USA. She also saw to the interests of France: she was credited by the French press to have influenced the French-Russian alliance in 1894 and the peace in the French-German Colonial conflict of Morocco in 1905. She assisted her friend, the founder of East Asiatic Company, H.N. Andersen, with contacts in his affairs in Thailand. She was a popular person in Denmark.

Marie's husband and three sons were in India en route to Siam when they received word that she had died at Bernstorff.[6] 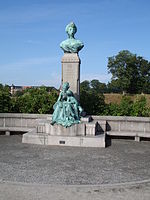 The monument at Langelinie, Copenhagen

The couple had five children:

Princess Marie is conmemorated with a monument at [[Langelinie[[, near St. Alben's English Church in Copenhagen. It was installed in 1912 in features a bust created by Carl Martin-Hansen.