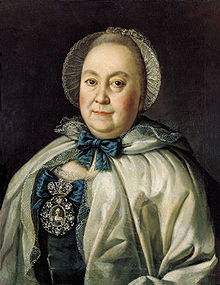 She was the daughter of privy councilor of Count Andrey Matveyev (1666–1728) from his first marriage with Anna Stepanovna Anichkov (1666–1699), and paternal granddaughter boyar Artamon Matveyev. She received a European education, living the first years of her life in Vienna and The Hague, where her father served as ambassador until 1710.

Fluent in French, a skillful dancer, beautiful and lively she attracted the attention of Peter I. Peter was severely jealous, reportedly threatened her with corporal punishment if she had another lover, placed her first among his mistresses and is said to have loved her until his death. She married 10 July 1720 Alexander Rumyantsev, and the couple were granted valuable gifts from the monarch. In 1725 her husband was in Constantinople and then to the Persian frontier to the disengagement, but Mary remained in Moscow and gave birth to a fourth child, a son, baptized in honor of Tsar Peter Alexandrovich. Grand Duke Nikolai Mikhailovich reported that the boy's father was not her spouse, but Tsar Peter himself was.

When Anna Ivanovna stripped her spouse of rank and exiled him to Kazan village, she and the children were sent to live in Alatyr village, where they spent about three years. In 1735 her husband had been restored to the rank of lieutenant general and made of Astrakhan, and then the Kazan governor, and appointed commander of the troops sent against the rebellious Bashkir. In 1738 Rumyantsev was appointed governor of the Ukraine, and the family moved to Kiev where, with the help of Mavra Shuvalova, Rumyantsev liaised with the disgraced Princess Elizabeth.

She was given the title countess and made lady in waiting to Empress Elizabeth of Russia, and had a lot of influence at court during her reign: reportedly, foreign powers paid her bribes for her influence. In 1744 Empress Elizabeth ordered her to head the court of princess Catherine. During the reign of Empress Catherine II, she continued to take part in court life and be present at ceremonies.