Maria Piotrowiczowa, a January insurgent, participant of the battle of Dobra (the Łódź province), born in 1839, killed on 24 February 1863.

Maria Piotrowiczowa came from a patriotic landowning family, possessing extensive landed estates near Łódź. Zygmunt Rogoliński, an insurger of 1831, and Ansberta born Badeńska were her parents. Her father formed his own armed detachment in the November Uprising. At the age of 17 Maria got married to Konstanty Piotrowicz, a teacher from Chocianowice. Together with her husband she acted in a Polish national organisation in Łódź.

Maria and Konstanty were an outwardly well-matched couple. Konstanty, a teacher in an elementary school in Chocianowice was a kind, good and decent man, above all loving his Homeland. Wealth was the only reason why he was not equal to his wife. Konstanty was one of these unselfish idealists who at the time of partitions took jobs of teachers to promote national and liberation ideas among the youth of poorer classes. He did not possess any wealth. Maria’s family wealth, on the contrary, was enlarged with a huge fortune bequeathed by her elder uncle, Stanisław Strzałkowski. This wealth secured a high standard of living for the married couple.

The battle of Dobra 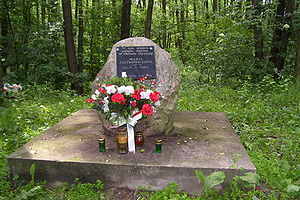 Maria was so pitifully affected by all the news about the defeats of insurrectionary troops as well as arrests and imprisonments that in the end she decided to support in person those who were fighting. Together with her husband and part of the servants from the manor farm near Łódź she joined Józef Dworzaczek’s troop operating in this area. She cut her beautiful hair and donned an insurrectionary czamara (men’s long-sleeved, fitted, braided outer garment, fastened at the neck, worn by Polish noblemen during the 17th-19th century). A troop of several hundred people consisted mostly of scythe-bearing peasant recruits, there were several dozen riflemen and less than 50 uhlan there as well. At the beginning Maria was on auxiliary duty, she collected money for the troop and bought weapons, food as well as uniforms. When the military situation deteriorated, she declared her intention of joining front-line duty.

Maria’s troop got tracked down by Russian garrisons being stationed in Piotrków Trybunalski and Łęczyca. Because of some mistakes in commending and because of an ostentatious march in the towns of the Łódź area there was an unnecessary unmasking of the troop. It eliminated a surprise element, which was so indispensable under guerrilla warfare conditions.

On 24 February 1863 the Russians took by surprise the insurgents camping on the edge of the forest near the Dobra village. Dworzaczek, a doctor, neglected posting a guard and conducting reconnaissance. The troop was encircled and forced to accept a defensive battle.

The battle started around midday and lasted until 5 p.m. From the beginning it was unfavourable for the Polish side. The insurgents repulsed two Cossack’ attacks but during the third one they defended themselves in a chaotic way. Some insurgents did not manage to slip out of the encirclement. Maria fought to the very end, she did not save her life and she did not rescue herself by escaping from the battlefield. She rejected the suggestion of surrender, given to her by Russian officers, because she recognised that such an attitude was incompatible with a dignity and honour of a Pole. Together with a group of young people she bravely defended the troop flag donated by Łódź women. Encircled by Cossack, she killed one, wounded another one and killed the horse under yet another one. She defended herself with a revolver and a scythe. She died hacked by the Cossack.

The Cossack tortured the body of dead Maria. Her body was pricked with piqués and sabres. Maria’s clothing, all in shreds and in blood, was preserved by her family as a precious relic.

The tragedy was enhanced by the fact that Maria was pregnant, later it turned out that she was to give birth to twins. After the battle the Russians demanded ransom for giving Maria’s body and for allowing it to be brought to the manor house. In the battle of Dobra three more women were also killed: Weronika Wojciechowska (aged 19) – a servant from Byszewy, Antonina Wilczyńska (aged 20) – a worker from Łódź and Katarzyna, whose surname remains unknown, fighting at Maria’s side. 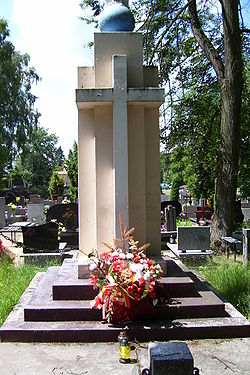 A monument in the cemetery in Dobra

Maria’s funeral took place on 28th February 1863 in the ancestral residence of the Piotrowicz family in Radogoszcz near Łódź (Presently Radogoszcz is part of Łódź). „In an open coffin – in fathers’ old manor house was lying her corpse. Lit blessed candles, a sobbing crowd around. Into the room came a Russian captain – the one whose soldiers had murdered Maria. He took a candle out of his pocket, lit it and put it at the feet of the heroine, and then he moved back to the corner of the chamber and, resting on his sabre, was crying...”

Konstanty Piotrowicz, Maria’s husband, to the very end fighting at his wife’s side, was seriously injured in the battle. Also Maria’s servant, Kacper Belka, who from youth had been teaching Maria the art of shooting, horse riding as well as swordplay, was killed. The seriously wounded Konstanty landed in a hospital in Łódź, run by the Women’s Committee. Despite his wounds he was slowly recovering, convinced that Maria had survived and was being treated in her mother's manor house. Nobody told him about his wife’s death.

At the same time Łódź was getting ready for the funeral of the insurgents who died the day before in hospitals. Maria was to be buried together with them. Konstanty heard the ringing of the bells in a hospital room. When he was told that it was Maria’s funeral, he had a heart attack. He died on the hands of a wife of an insurrectionary town commander, Mrs Zajączkowska, repeating the prayer that he had asked her to say.

Maria and Konstanty were buried in a family tomb in the Old Cemetery in Łódź. The other insurgents who had died in the battle were buried in the cemetery in a village of Dobra. At the 70th anniversary of the uprising on their tombstone was erected a monument with an inscription: „To the unfree heroes of 1863 – free compatriots of 1933”, and at the 140th anniversary of the uprising - a commemorative plaque with a list of the names of those killed in action.

Maria’s death caused a sensation in the whole country and it was one of the reasons why on 16 April 1863 the War Department of the National Government banned women from being accepted into front-line duty. From then on, women were only allowed to perform auxiliary functions in the insurrectionary troops. This ban was not obeyed everywhere. Women volunteered to join troops in a man’s disguise. 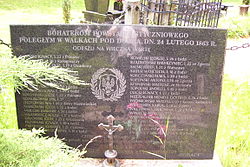 The plaque in the cemetery in Dobra