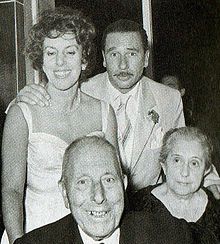 María Isbert with her her parents and husband, Antonio, in 1947.

María Isbert (21 April 1917 – 25 April 2011) was a Spanish actress whose credits included more than 250 Spanish films during her career.[1] Isbert worked with most major Spanish film actors and directors, including Luis García Berlanga and Luis Buñuel.[2] Isbert, whose credits included films, television and theater work, was most active from the 1960s to the 1980s.[2]

Isbert was born in Madrid, Spain, on 21 April 1917.[2] She was the daughter of Pepe Isbert, a popular Spanish film actor whose major roles included Welcome Mr. Marshall!.[2] Maria Isbert was the mother of seven children, including actor Tony Isbert.[1][2]

Isbert received numerous awards for her work, including the Silver Bellas Artes Medal in 1987.[1] She was also named an Honorary Academic of the Academia de las Artes y las Ciencias Cinematográficas de España in 2008.[1]

Maria Isbert died at the Villarrobledo Hospital in Villarrobledo, Albacete province, Castile-La Mancha, Spain, on 25 April 2011, at the age of 94.[1][2] A memorial was held at the Teatro Circo in Albacete.[1]