Maria Arbatova (originally Gavrilina) was born in 1957 in Murom. Her parents gave her complete freedom and the run of her grandfather's apartment in the Arbat. This apartment had once belonged to the famous singer Fyodor Chaliapin and provided Maria with her pen name of Arbatova,[2] which she took as her legal last name in 1999. Known as a non-conformist since her youth, she refused to join the Komsomol because it stood in contradiction to her principles.[3]

She studied in the School of Young Journalists at Moscow State University, later transferring to the Faculty of Philosophy. She left the University due to ideological issues. She then studied in the Dramatic Arts division of the Maxim Gorky Literature Institute,[2] and underwent training in psychoanalysis. She was also a hippie activist. In the pre-perestroika years, her literary works were banned by the censorship.[2] Today she is a member of the Moscow Writer’s Union and the Union of Theatrical Workers of Russia.[3]

She is the author of 14 plays staged in Russia and abroad, 20 books, and numerous articles in newspapers and periodicals. Her books and plays, coming from one of the first Russian woman writers with an openly feminist ideology, won the hearts of a wide audience. She co-hosted the popular television show I, Myself (Ya Sama), a program that ran for almost ten years. It was chiefly due to her efforts that the words "feminism" and "feminist" acquired legitimacy in the post-Soviet era. Since 2005, she has conducted a human rights related program The Right to be Yourself on Radio Mayak.[3]

Beginning in 1991, along with to her literary and media activities, she spearheaded the activities of Harmony, a feministic club for the psychological rehabilitation of women.[2][4] She has also provided individual counselling since 1996. From 1996 onwards, her Club of Women Interfering in Politics[5] has sought a more equal representation of women in Russian politics.[3]

She joined the ranks of the liberal Soyuz Pravikh Sil (Union of Right Forces), and made an unsuccessful bid in 1999 for election to the State Duma[5] from the University district of Moscow and, subsequently, wrote an account of her experience in the novel How I Fairly Tried to Get Into the Duma. In 2000, she conducted the political campaign of Ella Pamfilova, the first woman to run for the Presidency of Russia. Arbatova applied for the post of the Human Rights Plenipotentiary of Russia and, from 2001 to 2003, was the leader of the Human Rights Party. In 2005 she was among the leaders of the political block Free Russia during the Moscow municipal elections.[3]

Despite her hippie years and literary background, Arbatova lived much the same life and shared the same problems as most Soviet women. Her first marriage to singer Alexander Miroshnik broke up, and she had to bring up 2 twin sons (Peter and Pavel, born in 1977[2]) by herself. Her second marriage to Oleg Vitte didn't survive Arbatova's political activity and the State Duma elections she took part in. She is currently married to Shumit Datta Gupta, a financial anaylist.

Maria Arbatova's activities, through her books, her numerous appearances and statements in the press and her social work, have brought to the forefront the theme of discrimination against Russian women. She has always refused grants for her activities, rejecting monitary gains for her "missionary" work.[3] 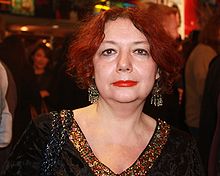