Margravine Elisabeth Fredericka Sophie of Brandenburg-Bayreuth (30 August 1732 – 6 April 1780), was a German princess member of the House of Hohenzollern and by marriage Duchess of Württemberg.

She was born in Bayreuth, the daughter of Frederick, Margrave of Brandenburg-Bayreuth by his first wife, Princess Fredericka Sophie Wilhelmine of Prussia, the favourite sister of King Frederick II the Great. Both the Margrave and the Margravine hoped for the eventual birth of a son and heir; however, this never happened. Thus, Elisabeth Fredericka Sophie grew up as an only child at the court of her father in Bayreuth.

At the time of her birth, her parents' marriage was still intact. However, during the following years the couple became estranged as Margrave Frederick turned his affections to other women. His most prominent mistress was Wilhelmine von Marwitz, one of his wife's ladies-in-waiting.

In January 1744 the ruling Duke Charles Eugene of Württemberg visited Bayreuth and fell in love with Elisabeth. Her uncle, King Frederick II the Great of Prussia, promoted Charles Eugene as a good match for her, because he had known him during the two years he was educated at the Prussian court. Although the Margrave of Brandenburg-Ansbach and the King of Denmark were also suitors of the princess, Elisabeth's family chose Charles Eugene.

On 26 September 1748 the marriage of Elisabeth Fredericka Sophie and Charles Eugene took place in Bayreuth. The wedding was the most festive celebration in the history of the margraviate. Within the framework of the brilliant festivities the margrave's opera house was opened and commemorative coins with half-length portraits of the young couple were stamped with the saying "If the lit flames are extinguished tenfold, they will only burn brighter".

The marriage was happy at first. However, the 15-year-old duchess had no influence on the politics of her realm. The duke soon abandoned any pretense of fidelity and spent much of his time with his mistresses. So it came to an increase in disputes between the couple.

On 19 February 1750 Elisabeth gave birth to their only child, a daughter, Princess Fredericka Wilhelmine Augusta Luisa Charlotte of Württemberg, who died on 12 March 1751 shortly after her first birthday. The absence of a male heir increased the conflicts between the young couple. After a journey to Italy in 1753, the couple still remained together. However, after the homecoming, the Duke again took mistresses and new disputes arose. When in 1756, without her knowledge, he despotically arrested and illegally imprisoned Elisabeth's friend, chamber singer Marianne Pirker, the ducal couple of Württemberg became permanently estranged. 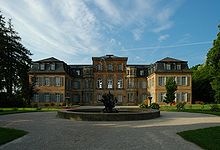 During the Seven Years' War Charles Eugene joined of the alliance of Austria and France against Prussia and England and in doing so destroyed his friendly connections with the Prussian King. When in the autumn of 1756 Elisabeth visited her mother in Bayreuth, she refused to return to her husband in Württemberg. The dispute over the state of her marriage to Charles Eugene was now out in the open. It took until 1759 for Elisabeth's father and Charles Eugene to make a final agreement. The marriage would not be dissolved, and Elisabeth would remain as Duchess of Württemberg. Charles Eugene and the estates of Württemberg were bound to pay 54.000 guilders of maintenance to her annually. However, Charles Eugene kept the right to determine her household. In this way he remained informed about her activities and could also affect her circumstances.

After the death of her father in 1763, Elisabeth inherited the castle (German: Schloss) near Donndorf (now municipality Eckersdorf), which was still under construction. It had been begun by the Margrave Frederick, but was not completed until 1765. She remodeled and furnished the Schloss to suit her tastes and personality, and gave it the name of Schloss Fantaisie which it still bears today.

She died in the Old Castle (Alten Schloss) in Bayreuth, aged forty-seven. As her request, she was buried in the Castle Chapel of Bayreuth (Schlosskirche Bayreuth) beside her parents.