PPFs are normally drawn as bulging upwards ("concave") from the origin but can also be represented as bulging downward or linear (straight), depending on a number of factors. A PPF can be used to represent a number of economic concepts, such as scarcity of resources (i.e., the fundamental economic problem all societies face), opportunity cost (or marginal rate of transformation), productive efficiency, allocative efficiency, and economies of scale. In addition, an outward shift of the PPF results from growth of the availability of inputs such as physical capital or labour, or technological progress in our knowledge of how to transform inputs into outputs. Such a shift allows economic growth of an economy already operating at its full productivity (on the PPF), which means that more of both outputs can be produced during the specified period of time without sacrificing the output of either good. Conversely, the PPF will shift inward if the labor force shrinks, the supply of raw materials is depleted, or a natural disaster decreases the stock of physical capital. However, most economic contractions reflect not that less can be produced, but that the economy has started operating below the frontier—typically both labor and physical capital are underemployed. The combination represented by the point on the PPF where an economy operates shows the priorities or choices of the economy, such as the choice between producing more capital goods and fewer consumer goods, or vice versa. 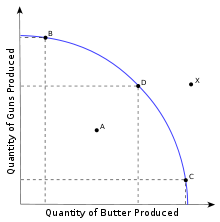 Such a two-good world is a theoretical simplification, due to the difficulty of graphical analysis of multiple goods. If we are interested in one good, a composite score of the other goods can be generated using different techniques.[2][3] Furthermore, the production model can be generalised using higher-dimensional techniques such as Principal Component Analysis (PCA) and others.[4]

For example, assume that the supply of the economy's factors of production does not change over time, in order to produce more butter, producing "guns" needs to be sacrificed. If production is efficient, the economy can choose between combinations (i.e. points) on the PPF: B if guns are of interest, C if more butter is needed, D if an equal mix of butter and guns is required.[1]

In the PPF, all points on the curve are points of maximum productive efficiency (i.e., no more output can be achieved from the given inputs); all points inside the frontier (such as A) can be produced but productively inefficient; all points outside the curve (such as X) cannot be produced with the given, existing resources.[5] A point on the curve satisfies allocative efficiency, also called Pareto efficiency, if, for given preferences and distribution of income, no movement along the curve or redistribution of income there could raise utility of someone without lowering the utility of someone else.[6] 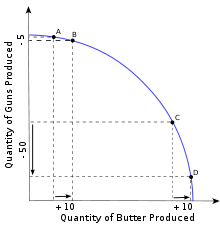 In the context of a PPF, opportunity cost is directly related to the shape of the curve (see below). If the shape of the PPF curve is straight-line, the opportunity cost is constant as production of different goods is changing. But, opportunity cost usually will vary depending on the start and end point. In the diagram on the right, producing 10 more packets of butter, at a low level of butter production, costs the opportunity of 5 guns (as with a movement from A to B). At point C, the economy is already close to its maximum potential butter output. To produce 10 more packets of butter, 50 guns must be sacrificed (as with a movement from C to D). The ratio of opportunity costs is determined by the marginal rate of transformation. 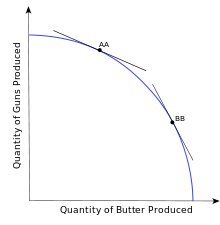 Marginal rate of transformation increases when the transition is made from AA to BB.

The slope of the production–possibility frontier (PPF) at any given point is called the marginal rate of transformation (MRT). The slope defines the rate at which production of one good can be redirected (by re-allocation of production resources) into production of the other. It is also called the (marginal) "opportunity cost" of a commodity, that is, it is the opportunity cost of X in terms of Y at the margin. It measures how much of good Y is given up for one more unit of good X or vice versa. The shape of a PPF is commonly drawn as concave from the origin to represent increasing opportunity cost with increased output of a good. Thus, MRT increases in absolute size as one moves from the top left of the PPF to the bottom right of the PPF.[7]

The production–possibility frontier can be constructed from the contract curve in an Edgeworth production box diagram of factor intensity.[8] The example used above (which demonstrates increasing opportunity costs, with a curve concave from the origin) is the most common form of PPF.[9] It represents a disparity in the factor intensities and technologies of the two production sectors. That is, as an economy specializes more and more into one product (e.g., moving from point B to point D), the opportunity cost of producing that product increases, because we are using more and more resources that are less efficient in producing it. With increasing production of butter, workers from the gun industry will move to it. At first, the least qualified (or most general) gun workers will be transferred into making more butter, and moving these workers has little impact on the opportunity cost of increasing butter production: the loss in gun production will be small. But the cost of producing successive units of butter will increase as resources that are more and more specialized in gun production are moved into the butter industry.[10]

If opportunity costs are constant, a straight-line (linear) PPF is produced.[11] This case reflects a situation where resources are not specialised and can be substituted for each other with no added cost.[10] Products requiring similar resources (bread and pastry, for instance) will have an almost straight PPF, hence almost constant opportunity costs.[10] More specifically, with constant returns to scale, there are two opportunities for a linear PPF: firstly, if there was only one factor of production to consider, or secondly, if the factor intensity ratios in the two sectors were constant at all points on the production-possibilities curve. With varying returns to scale, however, it may not be entirely linear in either case.[12]

With economies of scale, the PPF would appear inward, with opportunity costs falling as more is produced of each respective product. Specialisation in producing successive units of a good determines its opportunity cost (say from mass production methods or specialization of labor).[13] 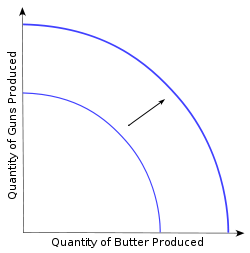 An unbiased expansion in a PPF

The two main determinants of the position of the PPF at any given time are the state of technology and management expertise (which are reflected in the available production functions) and the available quantities and productivity of factors of production. Only points on or within a PPF are actually possible to achieve in the short run. In the long run, if technology improves or if the productivity or supply of factors of production increases, the economy's capacity to produce both goods increases, i.e., economic growth occurs. This increase is shown by a shift of the production-possibility frontier to the right. Conversely, a natural, military or ecological disaster might move the PPF to the left, in response to a reduction in an economy's productivity.[1] Thus all points on or within the curve are part of the production set, i.e., combinations of goods that the economy could potentially produce.

In microeconomics, the PPF shows the options open to an individual, household, or firm in a two-good world. By definition, each point on the curve is productively efficient, but, given the nature of market demand, some points will be more profitable than others. Equilibrium for a firm will be the combination of outputs on the PPF that is most profitable.[17]

From a macroeconomic perspective, the PPF illustrates the production possibilities available to a nation or economy during a given period of time for broad categories of output. However, an economy may achieve productive efficiency without necessarily being allocatively efficient. Market failure (such as imperfect competition or externalities) and some institutions of social decision-making (such as government and tradition) may lead to the wrong combination of goods being produced (hence the wrong mix of resources being allocated between producing the two goods) compared to what consumers would prefer, given what is feasible on the PPF.[18]