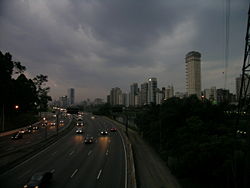 Marginal Pinheiros (officially SP-015) is a section of this highway that runs through the city of São Paulo, Brazil. The name of this section comes from the fact that each way of the expressway runs near a different waterfront of the Pinheiros River. It is one of the most important roads in São Paulo, linking the Interlagos neighborhood to the Cebolão, near the access to the Castelo Branco highway. It provides accesses to the Anchieta Highway and the Imigrantes Highway via the Bandeirantes Avenue, and to the Raposo Tavares Highway and the Régis Bittencourt Highway via the Francisco Morato Avenue. There are several bridges connecting each side of the river, such as the Octavio Frias de Oliveira bridge. Even though there are seven lanes in each side of the Marginal Pinheiros, it is still very common for traffic congestions to take place there.