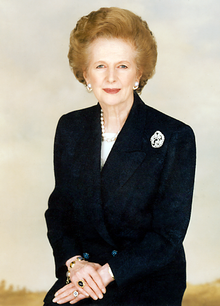 Margaret Thatcher was the Prime Minister of the United Kingdom between 4 May 1979 and 28 November 1990, during which time she led a Conservative government. She was the first woman to hold that office. During her premiership, Thatcher moved to modernise the British economy and promote free markets and entrepreneurialism.

These are the cabinets under Prime Minister Margaret Thatcher (from May 1979 to November 1990).