The Azerbaijan State Oil Academy shooting (Azerbaijani: Azərbaycan Dövlət Neft Akademiyasında terror hadisəsi) occurred on April 30, 2009 at the Azerbaijan State Oil Academy (ASOA), a public university in Baku. 12 people were killed (students and staff members including the Deputy Principal of the institution) by an armed assailant and several others were wounded. A joint statement by the Azerbaijan Interior Ministry and Prosecutor General's Office identified the perpetrator as 29-year-old Farda Gadirov, a Georgian citizen of Azerbaijani descent.[2] During investigation by Prosecutor General of Azerbaijan the involvement of Georgian citizen of Armenian descent Mardun Gumashyan was published[3] and is wanted by Interpol.[1]

Two buses of special forces had arrived at the scene.[4] According to Ehsan Zahidov, a spokesman for Interior Ministry, the special troops conducted an operation while people reportedly having been held hostage were released.[5] Three cartridge belts with capacity of forty and seventy one bullets along with two magazines were taken from Gadirov's body.[6]

Gadirov attacked the second building of the ASOA. First he killed a security guard and a cleaner as he entered the building, before opening fire on students and lecturers. Then while climbing from the first floor to the sixth, he shot people indiscriminately mainly in the head along the way. A witness said one student had tried to stop him but was also shot in the head.[7] A witness reported seeing two gunmen. Terrorism was suspected. The gunman barricaded himself in the Academy and police cordoned off the building.[8] 12 people were killed and 13 wounded. Gadirov then shot himself, when he saw the police were approaching. Police and paramedics soon arrived on the scene. The armed police cordoned off the building. All major routes to the university were blocked. Bodies were found all over the building. The injured were taken to ambulances stationed outside and evacuated to hospital. Most were soon in stable condition, but some were in critical condition and undergoing surgery. All students were evacuated and sent home.

However doubts over several details were expressed. Azeri military expert Uzeyir Jafarov said it is quite obscure to him the inexperienced assailant could kill and injure so many persons with a Makarov pistol. Jafarov outlined, that Gadirov was not a military person, but a civilian.[9] 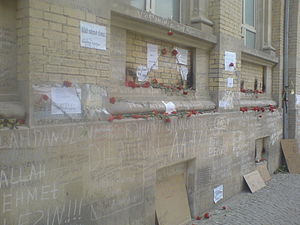 Wall of ASOA after terror act. May 3

According to Azeri Health Ministry, thirteen people were killed and ten wounded. Among wounded were two nationals of Sudan (Moustafa Mohammad, Amrouh Seyid Ahmad) and one of Syria (Daas Muawiya).[10] Three of the wounded were discharged from hospital shortly after the shooting.

The psychological aid was launched in Clinic Psychiatric Hospital #2, Neuropsychic Hospital and Children’s Neuropsychic Hospital. One thousand candles are planned to light in front of the university building in memory of the victims. The blood donation took place in Azerbaijani regions at initiative of the Health Ministry. A donation, held in Saatli, involved 230 people.[15]

The criminal case was launched under article 120.2.2 (deliberate murder committed from hooligan prompting), 120.2.4 (deliberate murder committed with special cruelty or endangering the public), 120.2.7 (deliberate murder of two or more persons), article 29 (attempt to murder), article 228.1 (illegal purchase, transfer, selling, storage, transportation or carrying of fire-arms, accessories to it, supplies (except for the smooth-bore hunting weapon and ammunition to it), explosives) of the Criminal Code of Azerbaijan.[10] According to the spokesman for the Prosecutor General Eldar Sultanov, Shirhan Nadir oglu Aliyev, a fellow-villager of Gadirov, was detained as a suspect. The criminal case launched against Farda Gadirov was dropped because of his suicide.[16] According to presidential order, direct financial assistances amounting to 30,000 manats were scheduled to be rendered to the families of killed persons, and 15,000 to the wounded from the president’s reserve fund.[17]

The parliament's Standing Human Rights Commission chair Rabiyyat Aslanova said that security must be increased in postsecondary institutions, but there is no need to amend any law to up security in them: "Higher schools have own regulations. The issue must be solved under the regulations".[18] Aslanova said that the cameras must be installed at the entrance to universities.[18] MP Fazil Mustafa told that it is impossible to check everybody, but serious dangers can be prevented.[18]

A morning ceremony began on Friday. The MPs, professors and students of ASOA, as well as the students of other country's universities, and the members of youth organizations attended the ceremony, which started early morning and continued until the night.[19] The participants laid red carnations and lit candles at the entrance and stairs of the Academy. The Irali Public Union joined the event with the slogan “No terror!”.[19] Roughly 2,000 students marched in Baku that day.[20] A mourning procession was also held by Azeri Americans in Washington.

Subsequently a Georgian citizen of Armenian origin Mardun Gumashyan was charged as the mastermind of the shooting.[21] Gumashyan is wanted by Interpol.[22] As stated in the indictment, Gumashyan was born in Georgian region of Marneuli in 1951.[21] He founded a criminal group, which embraced Farda Gadirov, Javidan Amirov, Nadir Aliyev and Najaf Suleymanov.[21] Gumashyan then struck a bargain with them to commit a terrorist attack. He offered them $50,000, paying $5,000 to Gadirov, who purchased a pistol and practiced to shoot.[21] The terrorist group arrived in Baku in March 2009.[21] The court hearing has been scheduled for April 21, 2010.[23]

Farda Gadirov was born in the village of Dashtapa near Marneuli. He spent most of his life in Podolsk, Russia, after his uncle invited him to help him in business but for unknown reasons returned to Baku.[25] An official from his home village, Vidadi Hasanov, described Gadirov as an unsociable child, which rarely left his home during his brief return.[26] On April 30, 2009, Gadirov arrived at the Azerbaijan State Oil Academy in Baku and opened fire on students within the second building, killing thirteen people and wounding ten other people before turning his gun on himself and committed suicide, according to witnesses, authorities, and the autopsy report.[27]

In the aftermath of the shootings, 15 countries and the European Union expressed condolences.

Commemoration of the events were prevented by government on April 30, 2010. Around the place were placed Azerbaijan Police in uniforms and plainclothes.[43][44][45]