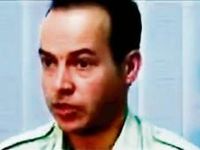 Marcus Hellwig (born 26 November 1965 in Wuppertal) is a German journalist working for the weekly BILD am Sonntag. In October 2010 he was arrested together with his partner Jens Koch in Iran, and has been in custody since then.[1]

One day prior to their arrest, Hellwig and Koch entered Iran under the pretext of being tourists, while actually intending to investigate on the case of Sakineh Ashtiani without having any working permission by the Iranian authorities. For this purpose, they arranged to meet Ashtiani's lawyer and her son, Sadjad Qaderzadeh, for an interview, which was to be held in the northwestern region of Iranian Azerbaijan. After only a few questions, Iranian authorities intervened and arrested Hellwig and Koch as well as Ashtiani's lawyer and her son.

According to a spokesman of the judiciary, authorities were warned by a person close to Ashtiani's family, who became suspicious about the foreigners' visit.[2]

Despite having entered Iran under wrong pretext and violating Iranian media law, Marcus Hellwig and Jens Koch were suspected to have preplanned the operation in accordance with Mina Ahadi. Ahadi was engaged via a regular telephone connection in the interview and served as a translator for the two Germans.[3] In an interview with Iranian state television, Hellwig and Koch admitted that they were stinged by Mina Ahadi to travel to Iran.[4] In Iran Ahadi is legally convicted for terrorism due to her past at the Komalah forces. A cooperation with Ahadi could turn out to be considered in the judiciary as an act against the national security of Iran.

On January 1, 2011, Sakineh Ashtiani announced in a press conference that she intends to sue the two German journalist for illegally interviewing her son about her case.[5]