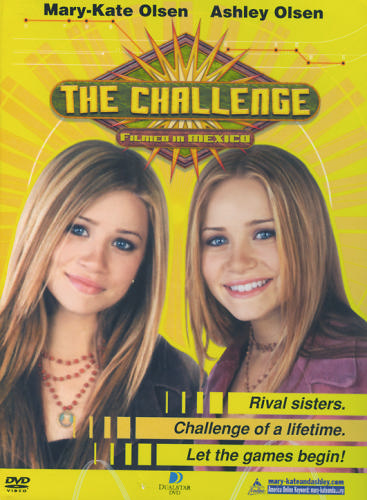 "The Challenge" is a starring , and their last direct-to-video production before their move to the big screen with "".

Shane is very into and is a , while her estranged twin sister Lizzie is neither of these. They are complete opposites, or so they think. Unknown to each other, both have entered to be in a called "The Challenge" and, as part of a deceitful scheme to boost the flagging (the show is on the verge of being cancelled if these don't improve), the producers think it would be fun to put both twins on the same team when they hate each other. Shane lives in with her mom and Lizzie in with her dad; they haven't seen each other in two years. The girls are both put on Team Mayan, and they have to try and get along for the sake of both the team and their . They do, of course, break some romance rules with some guys.

*This was Mary-Kate and Ashley's last movie before they would make an appearance on the big screen, with their next movie "". At the end of this movie, we see a flashback sequence of clips from all of Mary-Kate and Ashley's direct-to-video movies, which appears before the closing credits. These are from (in order of appearance): "Our Lips Are Sealed", "When in Rome", "", "", "", "" and "".

*Another 'flashback' is put in the movie when at the end, , , and , who have all played love interests for the girls in their movies, appear on the beach as themselves.