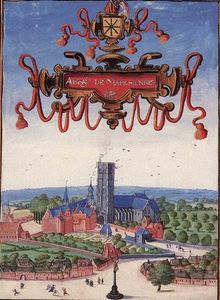 General view of the Abbey

Marchiennes Abbey was a French monastery located on the Scarpe in Marchiennes.

It was founded around 630 by Adalbaud, duc de Douai, and Irish monks, disciples of saint Columbanus, on the advice of Saint Amand. One of its founders was Rictrude, who made it double monastery in 643. In around 1024 it became monastery of men again and adopted the Benedictine rule. On the birth of the town of Marchiennes the abbey became its economic motor until being suppressed in 1791 during the French Revolution. In 1814 all but its 1748 gatehouse was demolished.

Its remains were inscribed on the inventory of monuments historiques on 17 May 1974, [1]