The Marquisate of Saluzzo was an historical Italian state that included French and Piedmont territories on the Alps.

The Marquisate of Saluzzo occupied parts of the provinces of Cuneo and Turin, and at times areas now under French control. However, Saluzzo was historically the area between the Stura, the Po and the Alps. the del Vasto family, who ruled Saluzzo throughout its period, also owned other areas in Liguria and Italy for the many arranged marriages, but Saluzzo never saw these territories annexed to it. Probably, if there had not been the Italian advance of Savoy, Saluzzo might have been able to conquer other lands in Piedmont, which ranking as one of the main Italian signorie.

The Government of Del Vasto

Ancient and noble dynasty of Liguria located in the region around Ventimiglia, Del Vasto became masters of the city when Boniface got it as a fief from Ulric Manfred II of Turin and passed it to his eldest son Manfred. From that moment the del Vasto became Marquis of the Piedmontese town and handed the title dynastically as a true signoria.

Manfred II, who had tried to extend the marquisate beyond its domain, battled with the Savoy and, after his death, his widow Alasia had to recognize them a number of tributes per year: from these tributes, Savoy camped claims on their mastery over the marquisate which led them to clash repeatedly against the weak Marquis. 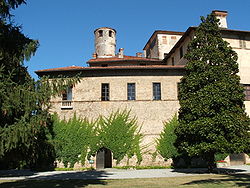 The Castello della Manta, an ancient possession of the lords of Saluzzo

Often torn by internal dissension, Saluzzo reached the period of greatest splendor under the Marquess of Ludovico I and Ludovico II in the 15th century: the first, with a policy neutral to Italian belligerence, was able to act as mediator between the discord and received praises from the emperor and the king of France; the second looking for the glory on the battlefield, was repeatedly beaten, beginning the end for the glory of the Marquisate. During his reign, however, he was attentive in developing trade by building the first Alpine tunnel, the Buco di Viso connecting with a safe road Saluzzo with the Dauphiné and Provence.

At his death, however, his children fought bitterly for the throne, tearing the countryside and draining finances: when it was possible to determine the order, it was too late: France had his eye over the Marquis, and was a formality, after the deposition of the last Marquis Gabriel, annexing it to the crown of Paris.

Saluzzo became part of France for half a century, until the Savoy, with the Treaty of Lyon (1601), succeeded in taking possession of it and retaining control, with alternating phases, until the Unification of Italy.