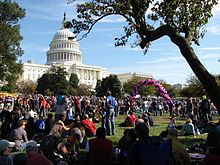 Rally at the west front of the United States Capitol following a march down Pennsylvania Avenue NW.

The National Equality March was a national political rally that occurred October 11, 2009 in Washington, D.C.. It called for equal protection for lesbian, gay, bisexual, and transgender (LGBT) people in all matters governed by civil law in all 50 states and the District of Columbia.[1] The march was called for by activist David Mixner and implemented by Cleve Jones,[2] and organized by Equality Across America and the Courage Campaign.[3] Kip Williams and Robin McGehee served as co-directors. This was the first national march in Washington, D.C. for LGBT rights since the 2000 Millennium March.[4]

Many groups joined by also organizing other events for the weekend, which coincided with National Coming Out Day on October 11 and marked eleven years since the beating and murder of gay University of Wyoming student Matthew Shepard, which prompted national attention and action to expand hate crime laws.

Equality Across America, which is fiscally sponsored by the non-profit Tides Center, states it intends to develop a network of decentralized organizers from each of the 435 U.S. Congressional districts.[1]

Hundreds of thousands of LGBT rights activists marched on Sunday, October 11, 2009 from the White House to the Capitol, demanding that President Barack Obama keep his promises to allow gays to serve openly in the military and work to end discrimination against LGBT people.[5] Many organizers were outraged after the passage of California's Proposition 8, which overturned the right of gays to get married in that state, and over perceived slights by the Obama administration.[6] Though there were no official crowd estimates,[7] mainstream media outlets estimated as many as 200,000 people participated.[5] Unlike the first national LGBT march in 1979 and others in 1987, 1993 and 2000 that included celebrity performances and drew as many as 500,000 people, the event was driven by grassroots efforts and was expected to be more low-key.[6]

Because organizers made extensive use of online social media tools to recruit and organize participants, the event was organized faster and more economically than those previous events.[8] Organizers spent $156,000 to produce the event, and raised approximately $260,000.[9] The surplus funds are being used by Equality Across America to pursue full Federal equality for LGBT people.[10]

There were a series of workshops, including one on tactics for repealing "Don't Ask, Don't Tell", a law prohibiting gays and lesbians from serving openly in the armed forces.[11] In addition, other workshops were on "How to Organize on Campus" and "Adoption Option: Adoption Is an Option." A "Transgender Community Building Caucus" was held.[11] Cleve Jones and Sherry Wolf held a workshop at Busboys and Poets café, with several hundred attending, on The Struggle for LGBT Liberation. 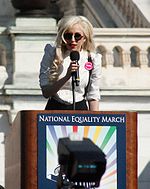 After the march a rally at the US Capitol featured more than 30 speakers,[12][13] including: 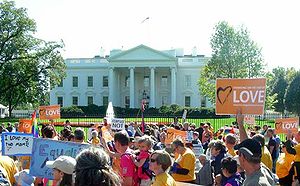 Marchers in front of the White House.

The National Equality March was endorsed by many of the major national LGBT organizations,[14] including GLAAD, HRC, MCC, the Task Force, and P-FLAG. In addition, it was endorsed by other organizations, such as the Screen Actors Guild, including many SAG members who individually endorsed the march as well. As well, the march was endorsed by other individuals, politicians, such as Senate Majority Leader Harry Reid,[15] faith leaders such as Rabbi and President of North American Reform Judaism, Eric Yoffie,[16] and others.

The night before the march, President Barack Obama addressed the Human Rights Campaign (HRC), the United States' largest LGBT civil rights organization, at a black-tie dinner in Washington, D.C. This was the second time an incumbent president has addressed HRC; President Bill Clinton first spoke to HRC in 1997.[11]

The speech was broadcast in full by CNN and C-SPAN. In it, Obama addressed a list of equality issues, including hate crimes, employment nondiscrimination, repealing the defense of marriage act, and HIV/AIDS. On overturning the military’s gay ban, he said “I will end ‘Don’t Ask, Don’t Tell,’ that's my commitment to you.”[17]