The 2010 Pichilemu earthquake (Spanish: Terremoto de Pichilemu de 2010), also known as the Libertador O'Higgins earthquake, was a 6.9 MW earthquake that struck Chile's O'Higgins Region on 11 March 2010 at 11:39 local time (14:39 UTC). The earthquake was centred 15 kilometres (9.3 mi) northwest of the city of Pichilemu, according to the University of Chile Geological Service.

The earthquake was caused by increased regional stress arising from an earthquake on 27 February, centered offshore Maule Region, which was felt throughout central Chile.[1] The 11 March earthquake was at first thought to be an aftershock from the 27 February event, but University of Chile Seismologist Jaime Campos identified it as an "independent earthquake". The Hawaii-based Pacific Tsunami Warning Center pointed out the possibility of local tsunamis within 100 kilometres (62 mi) of the epicenter,[3] although only small waves were seen in the Pichilemu area. One person was reported dead. At least 11 aftershocks immediately followed, causing panic throughout coastal towns between the Coquimbo and Los Lagos regions.[4][5]

Pichilemu is a Chilean city, capital of Cardenal Caro Province, O'Higgins Region.[6] As of 2002, it had 12,392 inhabitants.[7] The city hosts five National Monuments of Chile, including the Agustín Ross Park, and the Agustín Ross Cultural Centre,[8] both of which were seriously damaged by the earthquake. Tourism is the main industry of the city.[9] Several surf championships take place every year in Punta de Lobos, which according to Fodor's is "widely considered the best surfing in South America year-round."[10] 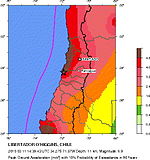 Seismic hazard near the epicenter of the earthquake.

The 6.9 earthquake of 11 March 2010 was part of a series of earthquakes and aftershocks in central and southern Chile, following the 8.8 magnitude earthquake in Maule Region two weeks earlier. While news media reported the earthquake as an aftershock of the February earthquake in Chile,[11][12] a preliminary geological summary issued by the United States Geological Survey (USGS) considered it to be an independent earthquake,[1] a conclusion which seismologist Jaime Campos of the University of Chile also reached.[13][14]

From the pattern of aftershocks, it has been suggested that this earthquake originated from rupture along a previously unknown fault (Pichilemu Fault) between Pichilemu and the Maule Region commune of Vichuquén, at 15 km depth, 40 km in length and 20 km wide.[16] At first it was not known whether this fault was formed during the earthquake or if it was just reactivated,[17] however geologist José Cembrano from the University of Chile affirmed that "[the fault] corresponds to a long life fault, in a million years time, whose activity had not been detected before."[18]

The earthquake occurred 15 kilometres (9.3 mi) northwest of Pichilemu, at a depth of 33.1 kilometres (20.6 mi) according to the University of Chile Seismological Service,[2][19][20][21] while the United States Geological Service reported it occurred 105 kilometres (65 mi) west of Rancagua, capital of O'Higgins Region, at a depth of 11 kilometres (6.8 mi); Pichilemu News reported the earthquake occurred 35 kilometres (22 mi) northeast of Pichilemu, between the villages of Panilonco and La Aguada, and reached a moment magnitude of 7.2.[22] As of 15 March 2010, more than 50 aftershocks had occurred in the area, the strongest of them measuring 6.7 in the moment magnitude scale, minutes after the initial quake.[23] 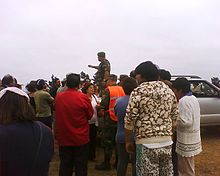 The earthquake took place minutes before the new President of Chile, Sebastián Piñera, was sworn in, at about 12:15 local time (15:15 UTC), at the Chilean congress in Valparaíso, where the shaking was clearly felt.[24] The presidents of Argentina, Bolivia, Colombia, Ecuador, and Paraguay were also present, but television footage showed that the inauguration was not interrupted;[25] however, it was reported the ceremony was "speeded," as Piñera cancelled the protocolary lunch with his visits and traveled to Rancagua, one of the most affected cities by the quake.[22]

A Pacific-wide tsunami warning was not issued by the Pacific Tsunami Warning Center, although the organization pointed out the possibility of local tsunamis within 100 kilometres (62 mi) of the epicenter, roughly between La Serena and Concepción.[3] The Hydrographic and Oceanographic Service of the Chilean Navy (Servicio Hidrográfico y Oceanográfico de la Armada, SHOA) issued a tsunami warning between Coquimbo and Los Lagos regions, as a way of "keeping people protected" against the possible occurrence of new tsunamis.[22][26][27] President Sebastián Piñera urged coastal residents to move to higher ground in case of a tsunami.[27] People in Pichilemu fled to the La Cruz Hill for their security, where they received advice from members of the Army.[28] The SHOA-emitted tsunami warning was lifted at around 15:50 local time (18:50 UTC).[29]

President Piñera decreed "catastrophe state" in O'Higgins Region as a result of the quake, and appointed Army General Antonio Yackcich as Jefe de Plaza (English: Place Head) for the region, while he was visiting Rancagua that day.[30][31] 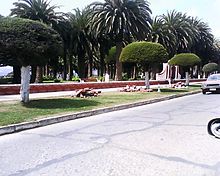 At Pichilemu, its epicenter, the earthquake destroyed the balaustrades surrounding Agustín Ross Park, damaged severely the recently re-inaugurated Agustín Ross Cultural Centre, and severely damaged the Espinillo and Rodeillo villages.[32][33] The earthquake was also reported to have been felt in Mendoza,[34] Bariloche, Córdoba, San Rafael, Buenos Aires, Montevideo and Asunción.[35][36] According to witnesses in the Pichilemu villages of Panilonco and La Aguada, the earthquake was accompannied by a "great noise."[22]

According to a report by the National Office of Emergency of the Interior Ministry (Oficina Nacional de Emergencias del Ministerio del Interior, ONEMI) on 11 March 2010, small waves were seen in the area surrounding Pichilemu. The Santa Julia overpass located between Rancagua and Graneros collapsed, and there were partial power outages in Mostazal, San Fernando and Peumo.[37]

A United States Geological Survey summary of the earthquake reported damage at Rancagua,[1] 177 kilometers southwest of Pichilemu.[38] The mayor of Rancagua, Eduardo Soto, reported severe damage to homes in the town.[39] A small tsunami was also reported, with sea wave heights of 16 centimetres (0.525 ft) at Valparaíso, and 29 centimetres (0.951 ft) at San Antonio.[1] Interior Minister Rodrigo Hinzpeter reported strong waves in Pichilemu[40] and Bucalemu, and damage to a highway in O'Higgins Region.[41] One person died of a heart attack during the earthquake in Talca, it was reported by La Tercera.[42]

Relief efforts stalled for about six hours because of the constant aftershocks.[41] Seismologist Mario Pardo from the University of Chile Seismological Service said on 15 March 2010 that it was thought Pichilemu was experiencing a seismic swarm, due to concerns about the continued aftershocks in the area.[43] After several power outages and tsunami alerts, many people in Pichilemu stayed at La Cruz Hill and at Cordón, Cáhuil.[33][44]

Within the following six hours there were ten aftershocks, two of magnitude 6 or greater, and seven between 5 and 6.[4]

ONEMI (National Emergencies Office) reported that the aftershock was felt most strongly in Talca, 258 kilometres (160 mi) south of Santiago. ONEMI's Pablo Marín said there were no casualties and only some telephone lines had collapsed.[46] Six aftershocks subsequently hit the area that day.[47] The earthquake was measured as magnitude 5.9 by the United States Geological Survey.[48]

Telephone calls were truncated in O'Higgins Region.[49] No infrastructural damage or casualties was reported.[49] The aftershock was felt throughout the Valparaíso, Metropolitan, O'Higgins, and Maule regions.[49] It was felt stronger in Rancagua, San Vicente de Tagua Tagua, Paredones, Navidad, Talca, Curicó, Iloca, Molina, and San Javier, where it reached Mercalli V intensity.[49]