The March 1990 Central US tornado outbreak is a tornado outbreak that affected portions of the United States Great Plains and Midwest regions from Iowa to Texas from March 11 to March 13, 1990. The outbreak produced at least 64 tornadoes across the region including 4 violent tornadoes; two of which were rated F5 that touched down north and east of Wichita, Kansas in which the most publicized tornado of this outbreak struck Hesston. In Nebraska, several strong tornadoes touched down across the southern and central portion of the state including an F4 that traveled for over 125 miles. 2 people were killed in the outbreak in Kansas both from the F5 tornadoes.

The Central U.S. tornado outbreak of March 13, 1990, was one of the most violent outbreaks March has ever seen (second only to the Palm Sunday tornado outbreak of 1965 in terms of violent tornadoes, and the March 2006 Tornado Outbreak Sequence in terms of the total number of tornadoes reported). Numerous tornadoes touched down across Nebraska, Kansas, Oklahoma, and Iowa. Two tornadic thunderstorms with exceptional life spans/tornado families were observed; one produced an F4 tornado in Eastern Nebraska that was on the ground for over 100 miles. The other produced an extensive tornado family in southern Kansas that included two F5 tornadoes. The first of these struck the town of Hesston, Kansas, and was one of the most photographed and documented violent tornadoes in history.

(based on NOAA Storm Data)

The Hesston and Goessel Tornado Family 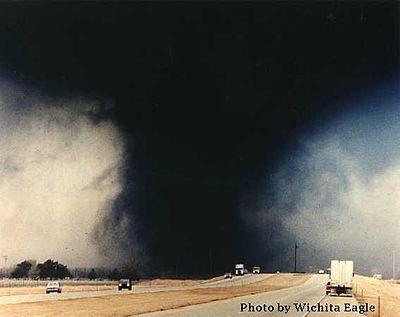 The Hesston, Kansas tornado as it passed through town near Interstate 135.

The storms that struck Hesston and Goessel were both spawned by the same Supercell Thunderstorm. They were part of what is known as a tornado family; a family that included several additional touchdowns after the Goessel storm dissipated.

The first tornado of the Hesston storm touched down at approximately 4:34 p.m. CDT just to the northeast of Pretty Prairie. It was initially between 200 and 500 yards in diameter, and caused minimal (F1-F2) damage as it churned between Castleton and the Cheney Reservoir. Photographic evidence suggests significant widening as the tornado approached Haven and the Arkansas River. The damage path ranged between 1/2 and 3/4 miles near Haven, and several homes were completely demolished indicating F4 damage. Had the tornado moved through a more populated area in this stage of its life, it is likely that it would have caused much more dramatic damage. Fairly constant F3 damage was produced from Haven to Burrton and to the Little Arkansas River. The path width remained over 1/2 mile in diameter.

Northeast of the Little Arkansas, the track abruptly decreased in width from 1/2 mile to just over 300 yards. Photographs suggest what appears to be a re-organization of the tornadic circulation; initially a wedge like appearance, the funnel quckly became tall and narrow. The most significant damage was done in this stage, however. The tornado plowed into the town of Hesston, just northwest of Newton on I-135. Numerous homes and businesses were destroyed, and several were swept completely from their foundations. Portions of the damage path in Hesston were rated F5. 59 people were injured; fortunately, only one fatality was reported.

The series of events that occurred as the tornado moved past the Hesston area were most interesting. Eyewitness accounts observed the touchdown of an additional tornado just to the north. Over the course of a few miles, the new tornado intensified and the original one diminished. Eventually, the Hesston storm (after having traveled for nearly 48 miles) merged with the new funnel, and the system began to re-intensify. Violent damage was produced by the second tornado in Marion county; several homes were again completely demolished and swept away and one additional fatality was reported. The storm passed Goessel and then dissipated approximately 22 miles from its genesis. It was also rated F5.