Maravatío is a municipality in the Mexican state of Michoacán, representing 1.17% of its land area, or 691.55 km2.

The modern word Maravatío comes from the P'urhépecha word Marhabatio, meaning a precious place or thing.

Neighboring locations include Guanajuato to the north; Contepec and Tlalpujahua to the east; Senguio, Irimbo, and Ciudad Hidalgo to the south; and Zinapécuaro to the west.

The economy of Maravatío is primarily agricultural in nature, focusing on the production of strawberries, corn, beans, potatoes, wheat, and tomatoes. The municipality also has a herd of cattle with some economic importance, industries focused on the fabrication of ornamental ironwork, as well as business sectors. 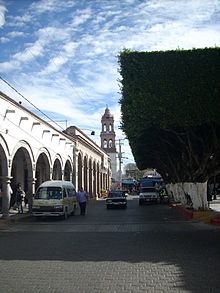 Maravatío city center, with the tower of the Parish Church in the distance.

Some of the principal places of interest to tourists in the municipality are the following:

Also of interest are the former haciendas of Apeo that were the property of Don Mateo Echaíz de Santa Elena in 1857; the house where Don Miguel Hidalgo stayed, near Independence Gate; the railway station, at which trains first arrived in 1883; and the Morelos Theater, constructed in the Porfirio Díaz era, which was inaugurated with a performance by the soprano Ángela Peralta.

Maravatío is a good base for visiting Monarch butterfly sanctuaries between October and March, and there are many hot springs near the city suitable for bathing.

Executive power in the municipality is vested in the Presidente Municipal or Municipal President. The following table lists Maravatío's past executives: