Effect of psychoactive drugs on animals

Effect of psychoactive drugs on animals 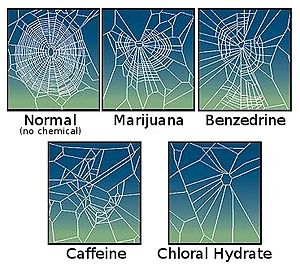 Drugs administered to a spider affect its ability to build a web.[1] 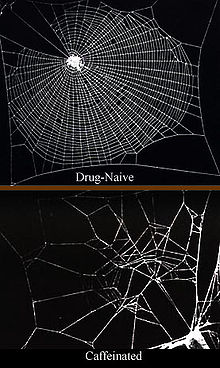 Caffeine has a significant effect on spiders, which is reflected in the construction of their webs.[1]

Psychoactive drugs, such as caffeine, amphetamine, mescaline, strychnine, LSD, marijuana, chloral hydrate, theophylline, IBMX and others, have a strong effect on animals. At small concentrations, they reduce the feeding rate of insects and molluscs, and at higher doses kill them. Spiders build more disordered webs after consuming most drugs than before. It is believed that some plants developed caffeine in their leaves as a natural protection against insects.

In 1948, German pharmocologist P. N. Witt started his research on the effect of drugs on spiders. The initial motivation for the study was a request from his colleague, zoologist H. M. Peters, to shift the time when garden spiders build their webs from 2am-5am, which apparently annoyed Peters, to earlier hours. Witt tested spiders with a range of psychoactive drugs, including amphetamine, mescaline, strychnine, LSD and caffeine, and found that the drugs affect the size and shape of the web rather than the time when it is built. At small doses of caffeine (10 µg/spider), the webs were smaller; the radii were uneven, but the regularity of the circles was unaffected. At higher doses (100 µg/spider), the shape changed more, and the web design became irregular. All the drugs tested reduced web regularity except for small doses (0.1-0.3 µg) of LSD, which resulted in more ordered webs.[2]

The drugs were administered by dissolving them in sugar water, and a drop of solution was touched to the spider's mouth. In some later studies, spiders were fed with drugged flies.[3] For qualitative studies, a well-defined volume of solution was administered through a fine syringe. The webs were photographed for the same spider before and after drugging.[2]

Witt's research was discontinued, but it became reinvigorated in 1984 after a paper by Nathanson in the journal Science,[4] which is discussed below. In 1995, a NASA research group repeated Witt's experiments on the effect of caffeine, benzedrine, marijuana and chloral hydrate on European garden spiders. NASA's results were qualitatively similar to those of Witt, but the novelty was that the pattern of the spider web was quantitatively analyzed with modern statistical tools, and proposed as a sensitive method of drug detection.[1][5]

Other arthropods and molluscs

In 1984, Nathanson reported an effect of methylxanthines on larvae of the tobacco hornworm. He administered solutions of finely powdered tea leaves or coffee beans to the larvae and observed, at concentrations between 0.3 and 10% for coffee and 0.1 to 3% for tea, inhibition of feeding, associated with hyperactivity and tremor. At higher concentrations, larvae were killed within 24 hours. He repeated the experiments with purified caffeine and concluded that the drug was responsible for the effect, and the concentration differences between coffee beans and tea leaves originated from 2-3 times higher caffeine content in the latter. Similar action was observed for IBMX on mosquito larvae, mealworm larvae, butterfly larvae and milkweed bug nymphs, that is, inhibition of feeding and death at higher doses. Flour beetles were unaffected by IBMX up to 3% concentrations, but long-term experiments revealed suppression of reproductive activity.[4]

Further, Nathanson fed tobacco hornworm larvae with leaves sprayed with such psychoactive drugs as caffeine, formamidine pesticide didemethylchlordimeform (DDCDM), IBMX or theophylline. He observed a similar effect, namely inhibition of feeding followed by death. Nathanson concluded that caffeine and related methylxanthines could be natural pesticides developed by plants as protection against worms: Caffeine is found in many plant species, with high levels in seedlings that are still developing foliage, but are lacking mechanical protection;[6] caffeine paralyzes and kills certain insects feeding upon the plant.[4] High caffeine levels have also been found in the soil surrounding coffee bean seedlings. It is therefore understood that caffeine has a natural function, both as a natural pesticide and as an inhibitor of seed germination of other nearby coffee seedlings, thus giving it a better chance of survival.[7]

Coffee borer beetles seem to be unaffected by caffeine, in that their feeding rate did not change when they were given leaves sprayed with caffeine solution. It was concluded that those beetles have adapted to caffeine.[8] This study was further developed by changing the solvent for caffeine. Although aqueous caffeine solutions had indeed no effect on the beetles, oleate emulsions of caffeine did inhibit their feeding, suggesting that even if certain insects have adjusted to some caffeine forms, they can be tricked by changing minor details, such as the drug solvent.[9]

These results and conclusions were confirmed by a similar study on slugs and snails. Cabbage leaves were sprayed with caffeine solutions and fed to Veronicella cubensis slugs and Zonitoides arboreus snails. Cabbage consumption reduced over time, followed by the death of the molluscs.[10] Inhibition of feeding by caffeine was also observed for caterpillars.[11]

About 70% of domestic cats are especially attracted to, and affected by the plant Nepeta cataria, otherwise known as Catnip. Wild cats, including tigers, are also affected, but with unknown percentage. The first reaction of cats is to sniff. Then, they lick and sometimes chew the plant and after that rub against it, with their cheeks and the whole body by rolling over. If cats consume concentrated extract of the plant, they quickly show signs of over-excitement such as violent twitching, profuse salivation and sexual arousal. The reaction is caused by the volatile terpenoids called nepetalactones present in the plant. Although they are mildly toxic and repel insects from the plant, their concentration is too low to poison cats.[12]