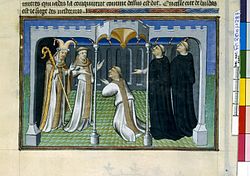 Riccoldo da Monte di Croce was in an audience with Yahballaha III.Roman Catholic in 15th century consider that Church of the East is heresy, described Yahballaha III as wear a Jester hat rather than mitre.

Yahballaha III (1245–1317),[1] known in earlier years as Rabban Marcos or Markos, was Patriarch of the Church of the East from 1281 to 1317. As a young man, he engaged in a remarkable journey, which began as an ascetic monk's pilgrimage from China to Jerusalem, led him to the Patriarch position in Baghdad, and brought him to recommend his former teacher and traveling companion, the monk Rabban Bar Sauma, to become the first Asian ambassador to Europe.

Markos was born near Beijing[2] (Khanbaliq, or Taitu), but his ethnic ancestry is not entirely clear. According to the Ecclesiastical Chronicle of Bar-Hebraeus he was of Turkic Uyghur descent. He was also referred to as 'Yahballaha the Turk' in the colophon to an East Syrian manuscript of 1301. On the other hand, the History of Mar Yahballaha III names the place of his birth as Koshang, thus perhaps suggesting that he was an Ongud from the Christian tribe's homeland in Inner Mongolia near Shanxi.[3]

He was consecrated as a monk, and became a student of Rabban Bar Sauma, another Uyghur or Ongud monk.[4] In the mid-13th century, they decided to make a pilgrimage to Jerusalem.[5]

The Mongol Khan Arghun wanted Yahballaha to incite the Pope into another Crusade. Due to military conflict in Syria, they never arrived at their destination, but did meet with the church leaders in the Mongol Ilkhanate, in Baghdad. There, the Patriarch Mar Denha I sent the two monks on a mission to the court of the Mongol Khan Abaqa, to obtain confirmation for Mar Denha's title. Along the way, Markos was appointed Metropolitan Bishop of China. The monks then intended to return to China, but their departure was again delayed by armed conflict. When the Patriarch died, the bishops elected Markos as the new Patriarch in 1281, and he took the name Yahballaha III ("God Gave Him").[6] It was extremely rare for an outsider to become patriarch, and Bar Hebraeus claims that Markos was elected because of his supposed influence with the Mongols. In the event, hopes that Yahballaha III might be able to influence Mongol policy were disappointed.[7]

Yahballaha held contacts with the Byzantine Empire and with Latin Christendom. In 1287, when Abaqa's son and successor Arghun Khan sought an ambassador for an important mission to Europe, Yaballaha recommended his former teacher Rabban Bar Sauma, who held the position of Visitor-General. Arghun agreed, and Bar Sauma made a historic journey through Europe, meeting with the Pope and many monarchs, and bringing gifts, letters, and European ambassadors on his return. Via Rabban Sauma, Yahballaha received a ring from the Pope's finger, and a papal bull which recognized Yahballaha as the patriarch of all the eastern Christians.[6]

In May 1304, Yahballaha made profession of the Catholic faith in a letter addressed to Pope Benedict XI. But the union was refuted by his Nestorian bishops.

In 1310 Yahballaha tried unsuccessfully to prevent the massacre of Christians in Erbil by a Muslim mob. This failure discouraged him, and he retired to Maragheh, the capital of the Mongol Ilkhanate, where he resided for the rest of his life.