Following on from recognition that women's rights were often marginalized in the context of human rights, a meeting organized by Women in Law and Development in Africa (WiLDAF) in March, 1995, in Lomé, Togo called for the development of a specific protocol to the African Charter on Human and People’s Rights to address the rights of women. The OAU assembly mandated the African Commission on Human and Peoples' Rights (ACHPR) to develop such a protocol at its 31st Ordinary Session in June, 1995, in Addis Ababa.[3]

A first draft produced by an expert group of members of the ACHPR, representatives of African NGOs and international observers, organized by the ACHPR in collaboration with the International Commission of Jurists, was submitted to the ACHPR at its 22nd Session in October 1997, and circulated for comments to other NGOs. [3] Revision in cooperation with involved NGO's took place at different sessions from October to January, and in April 1998, the 23rd session of the ACHPR endorsed the appointment of Julienne Ondziel Gnelenga, a Congolese lawyer, as the first Special Rapporteur on Women's Rights in Africa, mandating her to work towards the adoption of the draft protocol on women’s rights.[3] The OAU Secretariat received the completed draft in 1999, and in 2000 at Addis Ababa it was merged with the Draft Convention on Traditional Practices in a joint session of the Inter Africa Committee and the ACHPR.[3] After further work at experts meetings and conferences during 2001, the process stalled and the protocol was not presented at the inaugual summit of the AU in 2002.

In early 2003, Equality Now hosted a conference of women's groups, to organize a campaign to lobby the African Union to adopt the protocol, and the protocol's text was brought up to international standards. The lobbying was successful, the African Union resumed the process and the finished document was officially adopted by the section sumit of the African Union, on July 11, 2003.[3] 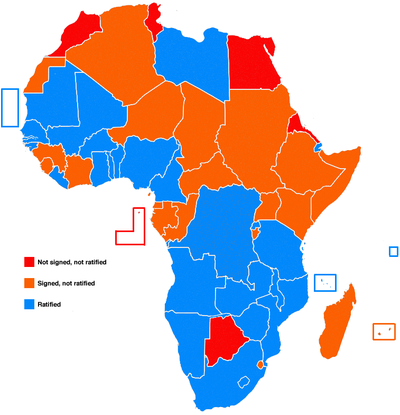 Of the 53 member countries in the African Union, the heads of states of 46 countries signed the protocol, and as of July 2010, 28 of those countries had ratified and deposited the protocol. [6]

Neither signed nor ratified by

The main articles are:

There are two particularly contentious factors driving opposition to the Protocol: its article on reproductive health, which is opposed mainly by Catholics and other Christians, and its articles on female genital mutilation, polygamous marriage and other traditional practices, which are opposed mainly by Muslims.

Pope Benedict XVI has described the Protocol as "an attempt to trivialize abortion surreptitiously". [8] The Roman Catholic bishops of Africa oppose the Maputo Protocol because it defines abortion as a human right. The US-based pro-life advocacy organization, Human Life International, describes it as "a Trojan horse for a radical agenda." [9]

In Uganda, the powerful Joint Christian Council has successfully opposed moves to ratify the treaty on the grounds that Article 14, in guaranteeing abortion "in cases of sexual assault, rape, incest, and where the continued pregnancy endangers the mental and physical health of the mother or the life of the mother or the foetus," is incompatible with traditional Christian morality. [10] In an open letter to the government and people of Uganda in January, 2006, the Catholic Bishops' Conference of Uganda set out their opposition to the ratification of the Maputo Protocol. [11] It got later ratified on 22 July, 2010.[12]

In Niger, the Parliament voted 42 to 31, with 4 abstentions, against ratifying it in June, 2006; in this Muslim country, several traditions banned or deprecated by the Protocol are common.[13] Nigerien Muslim women's groups in 2009 gathered in Niamey to protest what they called "the satanic Maputo protocols", specifying limits to marriage age of girls and abortion as objectionable.[14]