The Norton Manx or Manx Norton is a British racing motorcycle that was made from 1947 to 1962 by Norton Motors Ltd. A Norton had contested every Isle of Man TT race from the inaugural 1907 event through into the 1970s, a feat unrivalled by any other manufacturer, and the development and honing of the Manx racing motorcycle was another step in this racing achievement.

Appearing just after the war, the 1947 Manx Norton was a lightly redesigned prewar racing Norton International, an overhead cam single cylinder. The Norton factory race bikes under Joe Craig were the experimental models, and a customer version was available to buy from the factory in Bracebridge Street - to selected customers. Fitted with the McCandless brothers Featherbed frame for 1950, the Manx gained a new lease of racing life as a racing machine, the new frame giving the fine steering necessary for high speed navigation of some very fast racing circuits of the time.

The last Bracebridge Street (the original home of Norton) Manx Nortons were sold in 1963. Even though Norton had pulled out of International Grand Prix racing in 1954, the Manx had become the backbone of privateer racing.[8] The Classic Motorcycle Racing movement from the 1970s onwards has seen relatively large numbers of Manxs return to the track, and a flourishing supply of parts and services has appeared all around the world to nourish this demand. 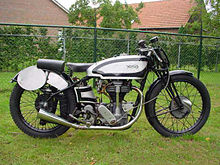 The Norton Manx was developed to win the Isle of Man TT from single overhead cam international racers by Norton racing team engineer Joe Craig. The double overhead cam configuration was developed in 1937 and after many problems perfected one year later. The Manx was delayed by the outbreak of World War II but reemerged for the 1946 Manx Grand Prix. The motorcycle was upgraded with new telescopic forks and in 1948 gained twin leading shoe brakes.[8] In 1950 the innovative Featherbed frame was developed, giving the Manx a significant competitive advantage through a low centre of gravity and short wheelbase that was perfectly suited the challenging island TT course. The all-welded, tubular featherbed frame was light and trim, without the usual forgings that added unnecessary weight. In 1950, the featherbed Manx recorded a double hat-trick of podium positions at the TT.[9]

The major 1954 upgrade to the Manx was to have been a laid-down engine design, with lower centre of gravity – along the lines of the Moto Guzzi and Benelli racers. However, a decline in sales in the mid 1950s prompted a number of manufacturers to withdraw from GP racing in 1954, and Nortons did likewise. The Norton F Type Manx, as it was to have been, still exists, and restored is displayed in the Sammy Millers Museum Collection. With Nortons withdrawal from racing, Joe Craig retired after more than 25 years of coaxing ever more power and reliability from his single cylinder Cammy racers.

British racer Les Archer, Jr. worked with frame specialist Ron Hankins and engine tuner Ray Petty to develop a Manx Norton motocross motorcycle. The double-overhead-cam, short-stroke Norton Manx road racing engine was fitted into a Hankins frame and finished with an aluminium tank and titanium axles. The Manx MX was successful, winning the 1956 F.I.M. 500 cc European Motocross Championship, but was not able to compete with the emerging two-stroke bikes.[10][11]

Manx Nortons also played a significant role in the development of post war car racing. At the end of 1950, the English national 500 cc regulations were adopted as the new Formula 3. The JAP Speedway engine had dominated the category initially but the Manx was capable of producing significantly more power and became the engine of choice. Many complete motorcycles were bought in order to strip the engine for 500 cc car racing, as Norton would not sell separate engines.[12] Manx rolling chassis were frequently sold on and paired with Triumph 500 cc twin engines to create Triton cafe racers.

1962 was the last full year for the production Norton Manx. In July AMC announced the transfer of production from Bracebridge Street to Woolwich in London. Forty two Manx Nortons were produced between November 1962 and January 1963.[8] In 1966 Colin Seeley purchased what remained of the spares and tools, which he eventually sold on to John Tickle in 1969. John Tickle took over the Manx name when Norton ceased production and acquired a large quantity of spare parts. He also manufactured complete racers, called the Manx T5 (500) and T3 (350). Both used the short-stroke Manx engines in a frame designed by Tickle but he could not compete against the Japanese racers and sold his stock and the rights in the late 1970s.