Mansoura (Arabic: المنصورة‎ Al Manṣūra) is a city in Egypt, with a population of 420,000. It is the capital of the Dakahlia Governorate.

Mansoura means 'The Victorious (city)'. The city is named after the Egyptian victory over Louis IX of France during the Seventh Crusade.

Mansoura lies on the east bank of the Damietta branch of the Nile, in the Delta region. Mansoura is about 120 km northeast of Cairo. Across from the city, on the opposite bank of the Nile, is the town of Talkha.

Mansoura was established in 1219 by Saladin's nephew, Abu-Bakr Malik ibn al-Adil I (their phater also known as Saphadin) of the Ayyubid dynasty. After the Egyptians defeated the Crusaders during the Seventh Crusade, it was named Mansoura (aka. "The Victorious").

In the Seventh Crusade, the Capetians were defeated and put to flight; between fifteen and thirty thousand of their men fell on the battlefield. Louis IX of France was captured in the main Battle of Mansoura, and confined in the house of Ibrahim ben Lokman, secretary of the sultan, and under the guard of the eunuch Sobih. The king's brother was imprisoned in the same house. The sultan provided for their sustenance. The house of Ibrahim ben Lokman is now the only museum in Mansoura. It is open to the public and houses articles that used to belong to the French monarch, including his personal thirteenth century toilet.[1]

The Mansura Air Battle [2][3] on October 14, 1973 occurred during the Yom Kippur War. Israeli Air Force fighters attacking Egyptian air bases were intercepted by the Egyptian Air Force. On that day, 160 jet fighters, most belonging to Israel, battled for 53 minutes over the Nile Delta town of Al-Mansoura. Despite the numerical and qualitative superiority of the Israeli warplanes, 18 Israeli planes were downed. The rest retreated.[4][5] Egypt announced the loss of six planes, only three of which fell to Israeli fire. The Egyptian government subsequently changed the country’s "Air Force Day" from November 2 to October 14, to commemorate the Mansoura Air Battle.[3]

Mansoura National Museum used to be Dar Ibn Lockman, the house where Louis IX was imprisoned in 1250 during the Seventh Crusade. Displayed in the museum are the suits of mail and swords of the crusaders, as well as a collection of maps. Huge paintings depict the Battle of Mansoura.

The Mansoura branch of the National Library was recently inaugurated as the Mansoura Mubarak Library.[6]

Mansoura is famous for its architectural style, especially the Shinnawi Palace (after Mohamed Bek El-Shinnawi, a member of the Wafd Party). It was built by an Italian architect in 1928. The mosque of El-Saleh Ayoub El-Kebir is one of the most important in Mansoura. It was built by a loyal servant of the Sultan and is located in Al-Sagha Street that separates "Old Mansoura" from the modern city.[7]

Like Cairo and Alexandria, Mansoura was home to a flourishing Greek community until the Nasserite era, when many were forced to leave. Many of the older and best established shops and businesses around the city still bear their original Greek names. The first English school in the city was established on the site of the old Greek school in the Toriel area, one of the traditionally relatively affluent residential districts of the city. 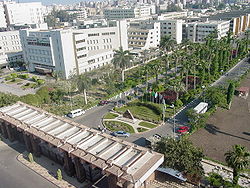 The University of Mansoura was founded in 1962, initially as a branch of Cairo University.[8] The Mohamed Ghonim Urology and Nephrology center of Mansoura University is considered to be the best kidney center in the Middle East and Africa.[7]

Mansoura has a sports stadium (Mansoura Stadium) which is home to its football team.[9]

The city's economy depends on trade, agriculture and the recently discovered natural gas.[10]