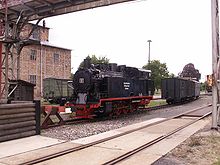 Locomotive No.9 at Benndorf

Copper ore is found around Mansfeld, and has been mined since 1199. In 1885, a 5.5 kilometres (3.4 mi) long railway opened linking the Glückhilf mine at Welfesholz and the Kupferkammer smeltery at Hettstedt. At first, the railway only carried goods traffic, but in 1882 the carriage of miners commenced. In 1883, workshops were established at Klostermansfeld.[1]

By 1930, the Mansfelder Bergwerksbahn systed extended to 95 kilometres (59 mi) of track, serving 13 copper mines, two smelteries and had interchanges with two station served by standard gauge trains. Transporter wagons were introduced during the 1930s, along with air brakes on the rolling stock. Traffic on the Mansfelder Bergwerksbahn reached its peak in 1955. The first diesel locomotives were introduced in 1961. In 1965, steam locomotive No. 10 was converted to use heavy oil as its fuel, the first narrow gauge locomotive in Germany to be so converted.[1]

Between 1964-69, the last of the copper mines at Eisleben and Hettstedt were closed. Carriage of passengers ceased in 1970. The smeltery in Eisleben closed in 1972 and the track between Eisleben and Helbra was lifted some years later. In 1989, the smeltery and power station at Helbra closed, and with it the railway too.[1]

In 1990, the railway between Hettstedt and Klostermansfeld reopened as a heritage railway. By 1993, all other lines had been lifted. In 1994, the remaining line was transferred to the Mansfelder Bergwerksbahn e.V. The line is maintaind as part of Germany's industrial and mining heritage.[1]