Mansa district, Punjab
This article is about the district. For its eponymous headquarters, see Mansa, Punjab. 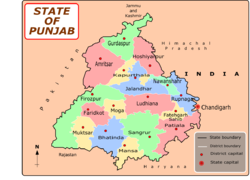 Districts of Punjab along with their headquarters

Mansa district (Doabi:ਮਾਨਸਾ ਜ਼ਿਲਾ) is situated in Punjab, India. The main town is Mansa. It was formed on 13 April 1992 from the erstwhile Bathinda district.

The district has an area of 2174 km² and a population of 688,630 (2001 census), with a population density of 317 persons per km². The district is roughly triangular in shape, and is bounded on the northwest by Bathinda district, on the northeast by Sangrur district, and on the south by Haryana state. The district is divided into three tehsils, Budhlada, Mansa, and Sardulgarh. The Ghaggar River flows through Sardulgarh tehsil in the southwestern corner of the district. It is situated on the rail line between Bathinda-Jind-Delhi section and also situated on the Barnala-Sardulgarh-Sirsa road.

The population is Punjabi-speaking and is wedded to the culture of the Malwa belt of Punjab.

Mansa is situated in the cotton belt of Punjab and therefore popularly called the "Area of white gold". Indeed agriculture forms the backbone of the district economy. During the months of November and December a visitor to this part of Punjab can witness the pristine, milky white blooms of cotton.

Industrially, the district is very deficient, yet some trade and industry is being carried out in urban areas.

Mansa district has pre-harappan,harappan and late harappan sites which prove that region was inhabited by people as late as 2800 BC.According to the gazetteer of bathinda district harappan sites in this region were mapped by archaeologist B.B Lal in the year 1981-82 Harappan sites found in mansa district Pre-Harappan Period 1. Alipur Manoran 2. Baglian-de-Theh 3. Bare 4. Chhoti Mansa 5. Dhalewan 6. Gurni Kalan 7. Hasan Pur 8. Hirke 9. Lakhmir Wala 10. Naiwala Theh Harappan Period 1. Alipur Mandran 2. Baglian-de-Theh 3. Dalewan 4. Chhoti Mansa 5. Gurni Kalan 6. Hassanpur 7. Hirke 8. Karanpura 9. Lakhmir Wala 10. Lallian Wali 11. Lalu Wala 12. Ali-Da-Theh 13. Naiwala Theh Late Harappan Period 1. Alipur Mandran 2. Chhoti Mansa 3. Ali-Da-Theh 4. Bare 5. Bhikhi 6. Danewala 7. Dalewala 8. Nehriwala 9. Sahnewali. The town of mansa is said to have been founded by Bhai Gurdas who hailed from Dhingar, District. Mansa. He is said to have married a member of the Dhaliwal Jat Sikh clan at this place. Once he came to his in-laws to take his wife along with him but they refused to send her. At this, Bhai Gurdas sat in meditation before the house of his in-laws. After some time, the parents of the girl agreed to send their daughter with Bhai Gurdas. But he refused to take her along with him, stating that he had now renounced the worldly way of life. In his memory, his Samadh was constructed where a fair is held every year in March–April. People in large numbers attend the fair and offer Laddus and gur at the Samadh. The town has been categorised as a Class ‘A’ municipality since 1952. During the late 80's many attacks on Hindus occurred by Sikh militants and was increasingly growing until army order was issued by the New Delhi government in the early 90's.

Budha and Ladha were allegedly two brothers who were khatri by caste. The village was purportedly named after thes two brothers. Some of the population of the village was of Mazhabi and Ramdasia caste origins. It was a part of the former Kaithal state. The ruler of the Kaithal state did not help the British during the insurgency of 1857. So the British annexed the kingdom. Later on, it was merged with Karnal District. It was the largest market of East Punjab. It was a very big recruitment centre for military personnel - which was second to only to Rohtak in India. The prestigious Ashoka Chakra Award was conferred on Hawaldar Joginder Singh Datewas who was recruited from Budhlada. Budhlada city is 70 km away from Bathinda and is situated on Bathinda-Delhi rail line. The border of Haryana state is 25 km away from the city. As per 1991 census, the total population of the city is 18,123. The sub division came into being on 1992-04-13. It has an Industrial Training Institute, JBT School, Guru Nanak College, Indira Gandhi College for Women, Govt. Senior Secondary School, DAV Model School and DAV Public School, Manu Vatika Day Boarding Senior Secondary School. CAL-C Computer Education,Guru Teg Bahadur College of education,Dalelwala etc... But now these days its still backward Area region. Its development is going down.

Mansa is well linked to other cities, particularly the national capital, New Delhi, by an efficient rail and transport system. The nearest airports are located at New Delhi and Chandigarh which are 248 km and 180 km away by road respectively. It is connected by rail and situated on the Delhi–Bathinda branch line of the Northern Railway. A few trains from the New Delhi–Bathinda Intercity Express and Punjab Mail service to Mansa station. Besides, there are several passenger trains running between New Delhi and Mansa at regular intervals daily. Bhaini Bagha is a village located on the Mansa-Bathinda road 10 km from Mansa.