Pseudomonas aeruginosa is a common bacterium that can cause disease in animals, including humans. It is found in soil, water, skin flora, and most man-made environments throughout the world. It thrives not only in normal atmospheres, but also in hypoxic atmospheres, and has, thus, colonized many natural and artificial environments. It uses a wide range of organic material for food; in animals, the versatility enables the organism to infect damaged tissues or those with reduced immunity. The symptoms of such infections are generalized inflammation and sepsis. If such colonizations occur in critical body organs, such as the lungs, the urinary tract, and kidneys, the results can be fatal.[1] Because it thrives on most surfaces, this bacterium is also found on and in medical equipment, including catheters, causing cross-infections in hospitals and clinics. It is implicated in hot-tub rash. It is also able to decompose hydrocarbons and has been used to break down tarballs and oil from oil spills.[2][3] 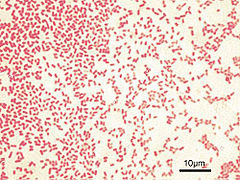 P. aeruginosa is often preliminarily identified by its pearlescent appearance and grape-like or tortilla-like odor in vitro. Definitive clinical identification of P. aeruginosa often includes identifying the production of both pyocyanin and fluorescein, as well as its ability to grow at 42°C. P. aeruginosa is capable of growth in diesel and jet fuel, where it is known as a hydrocarbon-using microorganism (or "HUM bug"), causing microbial corrosion.[3] It creates dark, gellish mats sometimes improperly called "algae" because of their appearance.[citation needed]

Although classified as an aerobic organism, P. aeruginosa is considered by many as a facultative anaerobe, as it is well adapted to proliferate in conditions of partial or total oxygen depletion. This organism can achieve anaerobic growth with nitrate as a terminal electron acceptor, and, in its absence, it is also able to ferment arginine by substrate-level phosphorylation.[8][9] Adaptation to microaerobic or anaerobic environments is essential for certain lifestyles of P. aeruginosa, for example, during lung infection in cystic fibrosis patients, where thick layers of lung mucus and alginate surrounding mucoid bacterial cells can limit the diffusion of oxygen.[10][11][12][13]

The G+C-rich Pseudomonas aeruginosa chromosome consists of a conserved core and a variable accessory part. The core genomes of P. aeruginosa strains are largely collinear, exhibit a low rate of sequence polymorphism, and contain few loci of high sequence diversity, the most notable ones being the pyoverdine locus, the flagellar regulon, pilA, and the O-antigen biosynthesis locus. Variable segments are scattered throughout the genome, of which about one-third are immediately adjacent to tRNA or tmRNA genes. The three known hot spots of genomic diversity are caused by the integration of genomic islands of the pKLC102/PAGI-2 family into tRNALys or tRNAGly genes. The individual islands differ in their repertoire of metabolic genes, but share a set of syntenic genes that confer their horizontal spread to other clones and species. Colonization of atypical disease habitats predisposes to deletions, genome rearrangements, and accumulation of loss-of-function mutations in the P. aeruginosa chromosome. The P. aeruginosa population is characterized by a few dominant clones widespread in disease and environmental habitats. The genome is made up of clone-typical segments in core and accessory genome and of blocks in the core genome with unrestricted gene flow in the population.[15]

Cell-surface polysaccharides play diverse roles in the bacterial "lifestyle". They serve as a barrier between the cell wall and the environment, mediate host-pathogen interactions, and form structural components of biofilms. These polysaccharides are synthesized from nucleotide-activated precursors, and, in most cases, all the enzymes necessary for biosynthesis, assembly, and transport of the completed polymer are encoded by genes organized in dedicated clusters within the genome of the organism. Lipopolysaccharide is one of the most important cell-surface polysaccharides, as it plays a key structural role in outer membrane integrity, as well as being an important mediator of host-pathogen interactions. The genetics for the biosynthesis of the so-called A-band (homopolymeric) and B-band (heteropolymeric) O antigens have been clearly defined, and much progress has been made toward understanding the biochemical pathways of their biosynthesis. The exopolysaccharide alginate is a linear copolymer of β-1,4-linked D-mannuronic acid and L-glucuronic acid residues, and is responsible for the mucoid phenotype of late-stage cystic fibrosis disease. The pel and psl loci are two recently-discovered gene clusters, which also encode exopolysaccharides found to be important for biofilm formation. A rhamnolipid is a biosurfactant whose production is tightly regulated at the transcriptional level, but the precise role that it plays in disease is not well understood at present. Protein glycosylation, in particular of pilin and flagellin, is a recent focus of research by several groups, and it has been shown to be important for adhesion and invasion during bacterial infection.[15] 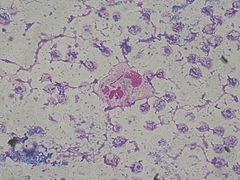 Phagocytosis of P. aeruginosa by neutrophil in patient with bloodstream infection (Gram stain)

It is the most common cause of infections of burn injuries and of the external ear (otitis externa), and is the most frequent colonizer of medical devices (e.g., catheters). Pseudomonas can, in rare circumstances, cause community-acquired pneumonias,[17] as well as ventilator-associated pneumonias, being one of the most common agents isolated in several studies.[18] Pyocyanin is a virulence factor of the bacteria and has been known to cause death in C. elegans by oxidative stress. However, research indicates that salicylic acid can inhibit pyocyanin production.[19] One in ten hospital-acquired infections are from Pseudomonas. Cystic fibrosis patients are also predisposed to P. aeruginosa infection of the lungs. P. aeruginosa may also be a common cause of "hot-tub rash" (dermatitis), caused by lack of proper, periodic attention to water quality. The most common cause of burn infections is P. aeruginosa. Pseudomonas is also a common cause of postoperative infection in radial keratotomy surgery patients. The organism is also associated with the skin lesion ecthyma gangrenosum. Pseudomonas aeruginosa is frequently associated with osteomyelitis involving puncture wounds of the foot, believed to result from direct inoculation with P. aeruginosa via the foam padding found in tennis shoes.

P. aeruginosa uses the virulence factor exotoxin A to ADP-ribosylate eukaryotic elongation factor 2 in the host cell, much as the diphtheria toxin does. Without elongation factor 2, eukaryotic cells cannot synthesize proteins and necrose. The release of intracellular contents induces an immunologic response in immunocompetent patients. In addition Pseudomonas aeruginosa uses an exoenzyme, ExoU, which degrades the plasma membrane of eukaryotic cells, leading to lysis.

With low phosphate levels, P. aeruginosa has been found to activate from benign symbiont to express lethal toxins inside the intestinal tract and severely damage or kill the host, which can be mitigated by providing excess phosphate instead of antibiotics.[20]

In higher plants, P. aeruginosa induces symptoms of soft rot, for example in Arabidopsis thaliana (Thale cress)[21] and Lactuca sativa (lettuce).[22][23] It is also pathogenic to invertebrate animals, including the nematode Caenorhabditis elegans,[24][25] the fruit fly Drosophila[26] and the moth Galleria mellonella.[27] The associations of virulence factors are the same for plant and animal infections.[22][28]

Regulation of gene expression can occur through cell-cell communication or quorum sensing (QS) via the production of small molecules called autoinducers. QS is known to control expression of a number of virulence factors. Another form of gene regulation that allows the bacteria to rapidly adapt to surrounding changes is through environmental signaling. Recent studies have discovered anaerobiosis can significantly impact the major regulatory circuit of QS. This important link between QS and anaerobiosis has a significant impact on production of virulence factors of this organism.[15] Garlic experimentally blocks quorum sensing in P. aeruginosa.[29]

Biofilms of P. aeruginosa can cause chronic opportunistic infections, which are a serious problem for medical care in industrialized societies, especially for immunocompromised patients and the elderly. They often cannot be treated effectively with traditional antibiotic therapy. Biofilms seem to protect these bacteria from adverse environmental factors. P. aeruginosa can cause nosocomial infections and is considered a model organism for the study of antibiotic-resistant bacteria. Researchers consider it important to learn more about the molecular mechanisms that cause the switch from planktonic growth to a biofilm phenotype and about the role of interbacterial communication in treatment-resistant bacteria such as P. aeruginosa. This should contribute to better clinical management of chronically infected patients, and should lead to the development of new drugs.[15] 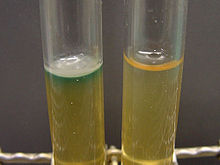 Depending on the nature of infection, an appropriate specimen is collected and sent to a bacteriology laboratory for identification. As with most bacteriological specimens, a Gram stain is performed, which may show Gram-negative rods and/or white blood cells. P. aeruginosa produces colonies with a characteristic 'grape-like' odour on bacteriological media. In mixed cultures, it can be isolated as clear colonies on MacConkey agar (as it does not ferment lactose) which will test positive for oxidase. Confirmatory tests include production of the blue-green pigment pyocyanin on cetrimide agar and growth at 42°C. A TSI slant is often used to distinguish nonfermenting Pseudomonas species from enteric pathogens in faecal specimens.

P. aeruginosa is frequently isolated from nonsterile sites (mouth swabs, sputum, etc.), and, under these circumstances, it often represents colonization and not infection. The isolation of P. aeruginosa from nonsterile specimens should, therefore, be interpreted cautiously, and the advice of a microbiologist or infectious diseases physician/pharmacist should be sought prior to starting treatment. Often no treatment is needed.

When P. aeruginosa is isolated from a sterile site (blood, bone, deep collections), it should be taken seriously, and almost always requires treatment.[citation needed]

P. aeruginosa is naturally resistant to a large range of antibiotics and may demonstrate additional resistance after unsuccessful treatment, in particular, through modification of a porin. It should usually be possible to guide treatment according to laboratory sensitivities, rather than choosing an antibiotic empirically. If antibiotics are started empirically, then every effort should be made to obtain cultures, and the choice of antibiotic used should be reviewed when the culture results are available.

Phage therapy against P. aeruginosa remains one of the most effective treatments, which can be combined with antibiotics, has no contraindications and minimal adverse effects. Phages are produced as sterile liquid, suitable for intake, applications etc. [30] Phage therapy against ear infections caused by P. aeruginosa was reported in the journal Clinical Otolaryngology in August 2009[31]

Antibiotics that have activity against P. aeruginosa may include:

These antibiotics must all be given by injection, with the exceptions of fluoroquinolones and aerosolized tobramycin. For this reason, in some hospitals, fluoroquinolone use is severely restricted to avoid the development of resistant strains of P. aeruginosa. In the rare occasions where infection is superficial and limited (for example, ear infections or nail infections), topical gentamicin or colistin may be used.

Phosphate has been implicated in pathogenesis of P. aeruginosa, which is normally benign. Phosphate is required by the bacteria for normal functioning, and has been shown in experiments on two very different organisms to turn on its host.[20]