This article covers numbered east-west streets in Manhattan, New York City. Major streets have their own linked articles; minor streets are discussed here. The streets do not run exactly east-west, because their grid is aligned with the Hudson River rather than with the cardinal directions. Rather their "west" is approximately 29 degrees north of west.

Although the numbered streets begin just north of East Houston Street in the East Village, they generally do not extend west into Greenwich Village, which already had streets when the grid plan was laid out by the Commissioners' Plan of 1811. Streets that do continue farther west change directions before reaching the Hudson River. The grid covers the length of the island from 14th Street up. (13th Street is almost the southernmost numbered street to cover the entire width of Manhattan without changing directions, but diverts briefly northward as it meets 8th Avenue.)

The highest street number in Manhattan is 220th Street, but the numbering continues in The Bronx up to 263rd Street.[1] 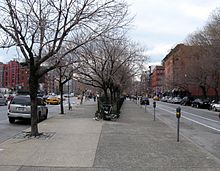 The east end of these streets is Avenue D, except for the aforementioned East 1st Street and East 6th Street, which connects to FDR Drive.

The west end of these streets is Bowery/Third Avenue, except for 3rd Street, formerly Amity Place, (to Sixth Avenue) and 4th Street (to West Street), which extend west and north, respectively, into Greenwich Village. Great Jones Street connects East 3rd to West 3rd.

8th and 9th Streets run parallel to each other, beginning at Avenue D, interrupted by Tompkins Square Park at Avenue B, resuming at Avenue A and continuing to Sixth Avenue. West 8th Street is an important local shopping street. 8th Street between Avenue A and 3rd Avenue is called St Mark's Place, but it is counted in the length below.

M8 bus route operates eastbound on 8th Street and westbound on 9th Street between Avenue A and Sixth Avenue.

10th Street begins at FDR Drive and 11th and 12th Streets at Avenue C. West of Sixth Avenue they turn southward about 40 degrees to join the Greenwich Village street grid and continue to West Street on the Hudson River. Because West 4th Street turns northward at Sixth Avenue, it intersects 10th, 11th and 12th and 13th Streets in the West Village.

M8 bus operates on 10th Street in both directions between Avenue D and Avenue A, and eastbound between West Street and Sixth Avenue.

10th Street has an eastbound bike lane from 6th Avenue to the East River. In 2009, the two-way section of 10th Street between Avenue A and the East River had bicycle markings and sharrows installed, but it still has no bike lane.

13th Street is in 3 parts. The first is a dead end from Avenue C. Then it starts at a dead end, just before Avenue B, and runs to Greenwich Avenue, and the 3rd part is from 8th Avenue to 10th Avenue.

14th Street is a main numbered street in Manhattan. It begins at Avenue C and ends at West Street. Its length is 3.4 km (2.1 mi). It has six underground stations:

From Avenue A or Avenue C to West Street there is service M14AD bus.

On the part of 19th Street between 10th and 11th Avenues, the travel direction is different.

23rd Street is another main-er numbered street in Manhattan. It begins at FDR Drive and ends at 11th Avenue. Its length is 3.1 km/1.9m. It has two-way travel. On 23rd Street there are five local underground stations:

Additionally, there is the M23 bus, running through the length of 23rd Street.

24th and 25th Street are in two parts. 24th Street starts at 1st Avenue, 25th Street at FDR Drive and they both end at Madison Avenue, because of Madison Square Park, then they continue from 5th Avenue to 11th Avenue (25th) or 12th Avenue (24th)

26th Street is all in one part

27th Street is also in 2 parts, one from 2nd to 8th Avenues and the other from 9th to 12th Avenues

There are no subway stations on these streets.

On 24th Street between 3rd and Lexington Avenues there is a bus stop for routes M101 (Night only), M102 and M103 towards East Village or City Hall, and between 11th and 12th Avenue there is an M23 bus stop towards FDR Drive

31st Street begins on the West Side at the West Side Yard while 32nd Street, which includes a segment known as "Korea Way" between Fifth Avenue and Broadway in Manhattan's Koreatown, begins at the entrance to Penn Station and Madison Square Garden. On the East Side, both streets end at Second Avenue at Kips Bay Towers and NYU Medical Center which occupy the area between 30th and 33rd Streets.

A station complex with platforms for two subway lines: