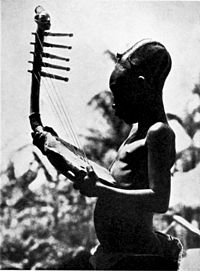 Sub-Saharan African music traditions exhibit so many common features that they may in some respects be thought of as constituting a single musical system.[1] While some African music is clearly contemporary-popular music and some is art-music, still a great deal is communal and orally transmitted while still qualifying as a religious or courtly genre. The music of the Luo, for example, is functional, used for ceremonial, religious, political or incidental purposes, during funerals (Tero buru) to praise the departed, to console the bereaved, to keep people awake at night, to express pain and agony and during cleansing and chasing away of spirits, during beer parties (Dudu, ohangla dance), welcoming back the warriors from a war, during a wrestling match (Ramogi), during courtship, in rain making and during divination and healing. Work songs are performed both during communal work like building, weeding, etc. and individual work like pounding of cereals, winnowing. 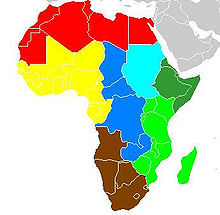 Geo-political map of Africa divided for ethnomusicological purposes, after Merriam, 1959.

Alan P. Merriam divided Africa into seven regions for ethnomusicological purposes, observing current political frontiers (see map), and this article follows this division as far as possible in surveying the music of ethnic groups in Africa. Music of the northern region of Africa (red on the map), including that of the Horn of Africa (dark green on the map), is mostly treated separately under Middle Eastern and North African music traditions.

The music of Sudan (turquoise on the map) indicates the difficulty of dividing music traditions according to state frontiers. The musicology of Sudan involves some 133 language communities.[2] that speak over 400 dialects,[3] Afro-Asian, Nilotic and Niger–Congo. The state of Sudan takes its name from the northern sub-saharan savanna which makes, with the Nile, a great cross-roads of the region.

It is the remaining four regions that are mainly thought typical of Sub-Saharan African music: familiar African musical elements such as the use of cross-beat and vocal harmony may be found all over all four regions, as may be some instruments such as the iron bell. This is largely due to the exoansion of the Niger–Congo-speaking people that began around 1500 BC: the Urewe nucleus of the Eastern Bantu was formed in Central Africa by 1000–500 BC and the Congo nucleus 500 BC–0, from where there was a southward advance. The last phases of expansion were 0–1000 AD.[4][5][6] Only a few scattered languages in this great area cannot readily be associated with the Niger–Congo language family. However two significant non-Bantu musical traditions, the Pygmy music of the Congo jungle and that of the bushmen of the Kalahari, do much to define the music of the central region and of the southern region respectively. 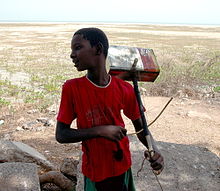 The Sahel (brown) forms a belt up to 1,000 km wide, spanning Africa from the Atlantic Ocean to the Red Sea. Southwards are the Sudanian savannas (green)

South of the Sahara the Sahel forms a bio-geographic zone of transition between the desert and the Sudanian Savannas, stretching between the Atlantic Ocean and the Red Sea. The Nilotic peoples prominent in southern Sudan, Uganda, Kenya, and northern Tanzania, include the Luo, Dinka, Nuer and Maasai.[7] Many of these have been included in the Eastern region. The Senegambian Fula have migrated as far as Sudan at various times, often speaking Arabic as well as their own language. The Hausa people, who speak a language related to Ancient Egyptian and Biblical Hebrew, have migrated in the opposite direction. The music of Sub-Saharan herders and nomads is heard from west to east. Further west the Berber music of the Tuareg has penetrated to Sub-Saharan countries, while the eastern region has received south Asian and even Austronesian influences by yet another route.

Early kingdoms were founded in the Lake Chad region. The Kanem Empire, ca. 600 BCE - 1380 CE[11] encompassed much of Chad, Fezzan, east Niger and north-east Nigeria, perhaps founded by the nomadic Zaghawa and then ruled by the Sayfawa Dynasty. The Bornu Empire (1396-1893) was a continuation when the Kanembu founded a new state in Bornu at Ngazargamu. The Kanuri languages spoken by some four million people in Nigeria, Niger, Chad and Cameroon as well as Libya and Sudan are associated with Kanem/Bornu Empire. Flute and drums music. The Kingdom of Baguirmi (also "Sultanate") (1522–1897), was an Islamic kingdom or sultanate that existed southeast of Lake Chad and the Kanem-Bornu Empire. The Ouaddai Empire (1635–1912) (also Wadai) was originally a non-Muslim kingdom, located to the east of Lake Chad that emerged as an offshoot of the Sultanate of Darfur to the northeast of the Baguirmi.

The music of West Africa shares, in its northernmost and westernmost parts, many of these transnational north sub-Saharan ethnic influences. Complex societies existed in the region from about 1500 BCE. The Ghana Empire[12] existed from before c. 830 until c. 1235 in what is now south-east Mauritania and western Mali. The Sosso people took its capital Koumbi Saleh but at the Battle of Kirina (c. 1240) Sundiata Keita's alliance defeated the Sosso and began the Mali Empire, which spread its influence along the Niger River through numerous vassal kingdoms and provinces. The Gao Empire at the eastern Niger bend was powerful in the ninth century CE but later subordinated to Mali until its decline. In 1340 the Songhai people made Gao the capital of a new Songhai Empire.[13]

A performance group from Burkina Faso based on the balafon

Music of the Western Sahara includes Mande speakers of Mali, Senegal and Mauritania, the Wolof people and the Fula, Senufo speakers of Côte d'Ivoire and Mali.

The Gulf of Guinea 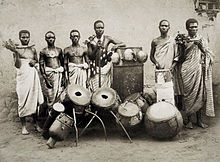 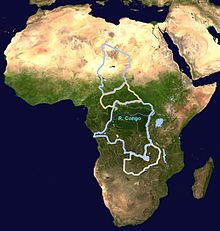 The Central African musicological region and the River Congo upon a satellite photograph showing the African tropical rainforest and desert regions.

The central region of African music is defined by the tropical rain-forests at the heart of the continent. However Chad, the northernmost state, has a considerable subtropical and desert northern region. 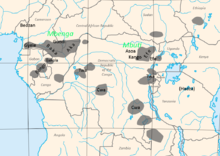 Distribution of Pygmies according to Cavalli-Sforza 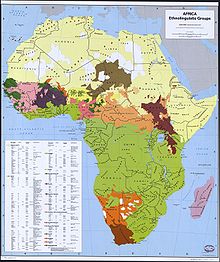 The East African musicological region, which includes the islands of the Indian Ocean, Madagascar, Réunion, Mauritius, Comor and the Seychelles, has been open to the influence of Arabian and Iranian music since the Shirazi Era. In the south of the region Swahili culture has adopted instruments such as the dumbek, oud and qanun - even the Indian tabla drums.[43] The kabosy, also called the mandoliny, a small guitar of Madagascar, like the Comorian gabusi, may take its name from the Arabian qanbūs. Taarab, a modern genre popular in Tanzania and Kenya, is said to take both its name and its style from Egyptian music as formerly cultivated in Zanzibar. Latterly there have been European influences also: the guitar is popular in Kenya, the contredanse, mazurka and polka are danced in the Seychelles.[44]

Drums (ngoma, ng’oma or ingoma) are much used: particularly large ones have been developed among the court musicians of East African kings. The term ngoma is applied to rhythm and dance styles as well as the drums themselves.[43] as among the East Kenyan Akamba, the Buganda of Uganda,[48] and the Ngoni people of Malawi, Mozambique, Tanzania and Zambia, who trace their origins to the Zulu people people of kwaZulu-Natal in South Africa.[49] The term is also used by the Tutsi/Watusi and Hutu/Bahutu.[50] Bantu style drums, especially the sukuti drums, are played by the Luhya people[47] (also known as Avaluhya, Abaluhya or Luyia),[51] a Bantu people of Kenya,[52] being about 16% of Kenya's total population of 38.5 million, and in Uganda and Tanzania.[52] They number about 6.1 million people.[53] Abaluhya litungo.[45]

The Southern Bantu languages include all of the important Bantu languages of South Africa, Zimbabwe and Botswana, and several of southern Mozambique. They have several sub-groups;