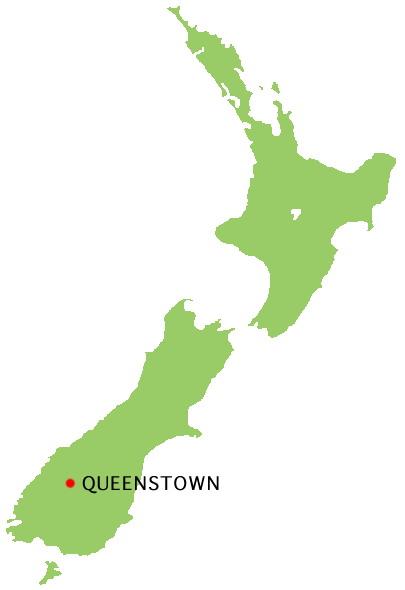 Queenstown is a in in the south-west of 's . It is built around an inlet on , a long thin lake shaped like a staggered lightning bolt, and has spectactular views of nearby mountains.

There are various apocryphal accounts of how the town was named, the most popular suggesting that a local gold digger exclaimed that the town was "fit for Queen Victoria". It is now known for its commerce-oriented tourism, especially adventure and ski tourism. It is popular with young international and New Zealand travellers alike.

The town is the largest centre in , and the second largest in Otago, but for a few administrative purposes (such as primary healthcare) it is administered as part of Southland. According to the 2006 census, the usually resident population of the Queenstown urban area (including Frankton and Kelvin Heights) is 10422 [cite web|url=http://www.stats.govt.nz/census/2006-census-data/final-counts/otago-region.htm|title=2006 Census Data, Final counts, Otago Region|publisher=] , an increase of 22.1% since 2001.

Its neighbouring towns and districts include , , Alexandra, and Cromwell. The nearest cities are and .

A resort town, Queenstown is a centre for . , jet boating, , mountain biking, tramping and are all strong promotional themes.

Queenstown is a major centre for snow sports in New Zealand, with people from all over the country and many parts of the world travelling to ski at the four main mountain skifields (, , and ).

In recent years Queenstown's hostels have become a popular destination for young Australian and American tourists. Queenstown provides adventure tourism during the day and a vibrant nightlife scene during the evenings.

Locally, Queenstown has a reputation as one of New Zealand's wine and cuisine centres. Neighbouring, historic Arrowtown features excellent restaurants and bars, and Queenstown lies close to the centre of a small wine producing region, reputed to be the world's southernmost. Pinot noir produced in this area fetches premium prices.

has scheduled flights to , and year-round and , and seasonally. Queenstown and the surrounding area contain many locations used in the filming of the "Lord of the Rings" film trilogy.

Queenstown has an alpine climate with winters that have clear blue skies and snow capped mountains. Summer has long warm days with temperatures that can reach 30°C (2007/2008).

was upgraded in the 1990s to handle jet aircraft, including international flights from . Due to sustained heavy growth, further terminal expansion was undertaken in 2005 and 2006, with more construction currently ongoing. The airport is serviced by regular domestic services from , and . and also operate regular international services from , and , the frequency being much increased over the ski season. Queenstown airport is 's busiest base, and is also heavily utilised for tourist 'flightseeing', especially to and , using both fixed and rotary wing aircraft.

The primary road access to the Queenstown area is via (SH6), which travels from Cromwell through the Kawarau Gorge to Frankton, where a 9-km spur (SH6A) leads to the CBD and connects with the Glenorchy Road. SH6 continues south, crossing the Kawarau river before heading down the eastern side of Lake Wakatipu to Kingston before emerging on the plains of Southland. A difficult road over the leads to Cardrona skifield and Wanaka, and is New Zealand's highest paved public road.

Queenstown is the departure point for a large number of day trips to . Due to the ardurous nature of the very popular trip (12 hours return), various measures have been proposed to cut the trip time, including a monorail and a new tunnel through the mountains.