Mangia (also styled Mangia', with a trailing apostrophe) is a 1983 video game by Spectravision for the Atari 2600 video game console. The North American (NTSC) version is one of the rarest games for the 2600, and has earned a rating of 10 ("Unbelievably rare") from the AtariAge rarity guide.[2] 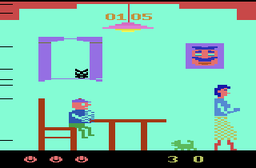 Mangia's gameplay has been described as "bizarre."[3] The player gets to control a young boy, who must eat plates of pasta placed in front of him by his mother, who will keep feeding him until his stomach explodes on-screen.[3]

To prevent this, the player can, instead of eating the pasta, throw it to a cat, who occasionally appears at the window, and a dog, who walks across the bottom of the screen. However, if the mother sees the pasta being thrown to the cat or dog, she brings three times as much pasta the next time she returns.[4]

The joystick is used to control the player: pressing right causes the boy to grab a plate of pasta, pressing left causes him to eat it, and pressing up or down causes him to toss the pasta to the cat (named Frankie in the manual) or the dog (named Sergio) respectively. If the cat and dog are not nearby when the food is thrown to them, the mother returns with extra pasta to "punish" the player. The fire button is not used.[4]

If, instead of eating the pasta or throwing it to the animals, the player is idle, the pasta will accumulate on the table until it breaks, causing the player to lose a turn. Attempting to eat all the pasta without giving any to the cat or dog will cause the boy's stomach to swell, changing colors from blue to yellow to red, before finally exploding in a mass of chunky blue pixels.[4][3]

The title "Mangia" is an Italian word meaning "so, eat!"[3] Mangia was produced by the company Spectravision (later renamed Spectravideo), famous for the rare and sought-after Atari 2600 cartridge Chase the Chuck Wagon.[5] Of the Spectravision games listed in the AtariAge rarity guide, Mangia is listed as the hardest to find, surpassing even Chase the Chuck Wagon on the rarity scale.[5]