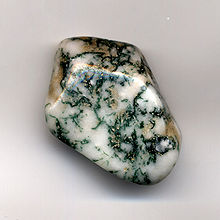 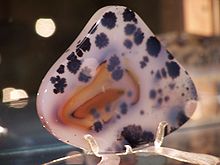 Moss agate (also called mocha stone) is a semi-precious gemstone formed from silicon dioxide. This mineral is commonly found in limestone and granite. It is a form of agate which includes minerals of a green colour embedded in the chalcedony, forming filaments and other patterns suggestive of moss. It also sometimes resembles blue-cheese. The field is a clear or milky-white quartz, and the included minerals are mainly oxides of manganese or iron. Moss agate is of the white variety with green inclusions that resemble moss. It occurs in many locations. The colors are formed due to trace amounts of metal present as an impurity, such as chrome or iron. The metals can make different colors depending on their valence.

Despite its name, moss agate does not contain organic matter and is usually formed from weathered volcanic rocks.