Mangalloy, also called manganese steel or Hadfield steel, is a steel alloy containing an average of around 13% manganese. Mangalloy is known for its high impact strength and resistance to abrasion. 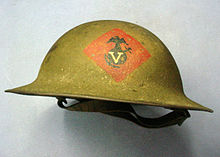 World War I Brodie helmet, made from Hadfield steel

Mangalloy is made by alloying steel, containing 0.8 to 1.25% carbon, with 11 to 15% manganese.[1] Mangalloy is a unique non-magnetic steel with extreme anti-wear properties. The material is very resistant to abrasion and will achieve up to three times its surface hardness during conditions of impact, without any increase in brittleness which is usually associated with hardness.[2] This allows mangalloy to retain its toughness.

Mangalloy has been used in the mining industry, cement mixers, rock crushers, railroad frogs, crawler treads for tractors and other high impact and abrasive environments. These alloys are finding new uses as cryogenic steels, due to their high strength at very low temperatures. Mangalloy is heat treatable, but the manganese lowers the temperature at which austenite transforms into ferrite. Most grades are ready for use after annealing and then quenching from a yellow heat, with no further need of tempering, and usually have a normal Brinell hardness of around 200 HB, (roughly the same as 304 stainless steel), but, due to its unique properties, this number has very little effect on determining the abrasion and impact resistance of the metal.[5]

Many of mangalloy's uses are often limited by its difficulty in machining. The metal cannot be softened by annealing, and usually requires special tooling to machine. The material can be drilled with extreme difficulty using diamond or carbide. Although it can be forged from a yellow heat, it may crumble if hammered when white-hot, and is much tougher than carbon steel when heated.[1] It can be cut with an oxy-acetylene torch, but plasma or laser cutting is the preferred method.[6] Despite its extreme hardness and tensile strength, the material may not always be rigid.[1] It can be formed by cold rolling or cold bending.[6]

In 1816, a German researcher noted that adding fairly large amounts of manganese to iron would increase its hardness without affecting its malleability and toughness,[3] but the mix was not homogeneous and the results of the experiment were not considered to be reliable.[7] The abundance of manganese in the iron ore used by the Spartans helped to produce a sword tougher than those of their military opponents.[3] In 1860, Sir Henry Bessemer, trying to perfect his Bessemer process of steel making, found that adding manganese and carbon to the steel after it was blown helped to remove excess sulfur and oxygen.[3] Sulfur combines with iron to form a sulfide that has a lower melting point than steel, causing weak spots, which prevented hot rolling. Manganese is usually alloyed with most modern steels because of its powerful ability to remove sulfur, phosphorus and oxygen, which are all common impurities in steel.[3] Mangalloy was the first alloy created from carbon steel,[3] also called Hadfield steel after its British inventor, Sir Robert Hadfield, in 1882.[5]

Hadfield was in search of a steel that could be used for casting which would exhibit both hardness and toughness, since ordinary carbon steels do not combine those properties. Steel can be hardened by rapid cooling, but loses its toughness, becoming brittle. Steel castings can not usually be cooled rapidly, for irregular shapes can warp or crack. Mangalloy proved to be extremely suitable for casting, as it did not form gas pockets called "blow-holes", and did not display the extreme brittleness of other castings.[8]

Upon creating mangalloy, Hadfield tested the material, thinking that the results must have been erroneous. After performing several hundred tests, he realized that they must be accurate, although the reason for the combination of hardness and toughness defied any explanation at the time. Hadfield wrote, "Is there any case similar to this among other alloys of iron, if the term alloy may be used? No metallurgical treatise refers to them;...Possibly when the nature of the laws governing alloys is better understood, this will be found to be only one of other cases,..."[9]