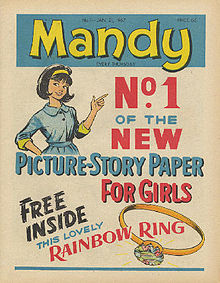 From 1991 until the 30 December 1995 issue, it was published as a merged comic with Judy. The two then merged with Bunty before ceasing publication completely in 2001.

Mandy's content, like many other girls comics from the time, appeared primarily in picture-story format. The majority of the stories were serialized, with typically 2-3 pages of a particular story appearing in each issue, and most stories lasting for 8-12 instalments. Some recurring theme elements of "Mandy" stories were:

Stories were generally moralistic in tone, with long-suffering heroines finally achieving happiness, while villainous relatives or girls who were liars, cheats and bullies received their comeuppance.

Two of the longest-running and most popular picture stories, which also featured in almost every annual, were "Angel" and "Valda". "Angel" centred around Angela Hamilton, a young, wealthy Victorian girl who discovers she has only a year to live and decides to devote her remaining time to caring for orphaned and unwanted children in the slums of the East End of London. "Valda" stories are set in many different times and places and follow the adventures of a girl with extraordinary abilities and apparently indefinite lifespan. Valda, who draws her physical strength from energy or light passing through a mysterious 'Crystal of Life' that she carries, travels the world coming to the aid of the oppressed and those threatened by dark or supernatural forces.

Mandy also ran text stories, usually serialized in the same manner as the picture-stories, of which the most popular was "The Guardian Tree". This followed the trials and tribulations of the Shaw family, when the five children are orphaned in Victorian times. The children, under the leadership of the eldest sister, Rose, escape the dreaded poorhouse by living on the moors in a cave beneath the roots of a vast tree they christen the "Guardian Tree", which appears to have mysterious and benevolent powers. The most popular text stories were often reworked and published as picture stories, including "The Guardian Tree" and "The Sad Star."