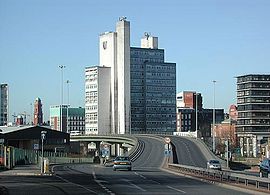 A view of the Mancunian Way elevated motorway near UMIST.

The Mancunian Way, officially the A57(M), is a two mile long motorway in Manchester, England. It is part of the A57, which runs east-west through Greater Manchester and links the M602 and M67 motorways.

The road forms a major part of the Manchester-Salford Inner Ring Road and runs south of the city centre. Running eastbound, it starts as a 2 lane dual carriageway and passes underneath the A56. Following this, the road widens to 3 lanes. At the next junction which leads to the A5103, the road reduces to 2 lanes and becomes an elevated highway. This section runs atop link roads and two roundabouts before reaching the next junction with the A34. At this point the road passes through the centre of the campuses of UMIST (now part of the University of Manchester) and Manchester Metropolitan University. It then runs for around ¾ mile (1.2 km) before reaching its junction with the A6 which it crosses on a bridge before dropping down to ground level. It then finishes on the A635 and continues eastbound, and also continues to be called the Mancunian Way.

The Mancunian Way was conceived to form part of the South East Lancashire and North East Cheshire (SELNEC) Highway Plan of 1962, although similar proposals were developed from 1959.[1] A Parliamentary Bill to authorise the construction of the Mancunian Way was proposed and approved in 1961.

The Mancunian Way was officially opened by Prime Minister, Harold Wilson, on 5 May 1967. In the 1970s it was upgraded to motorway status as the A57(M) and the speed limit was raised to 50 miles per hour (80 km/h).[2] At the time of its opening the Manchester Evening News referred to it as the "highway in the sky".[3]

In 1992 the westbound junction was rebuilt to replace a temporary flyover, whereby the A56 passed over a roundabout where the A57(M) originally ended. At the same time a new flyover was built at the eastern end, over the A6, but was legally designated as the A635(M) in 1995.[4]

Just before the junction with the A34 is an unfinished slip road (stub) that ends in mid-air, although it is hidden from the road by an advertising billboard. This was intended to be part of a dual carriageway into the city centre;[5] this plan was later abandoned.[6]

The last ½ mile (0.80 km) of the Mancunian Way in the east is part of the A635, the A57 heading south east from the same junction as the A6, though it states A57(M) on the signage as you enter westbound. Department for Transport documentation states differently,[7] so officially the Mancunian Way consists of two motorways, the A57(M) and the A635(M).

Note: motorway has no junction numbers 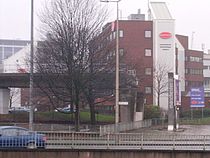