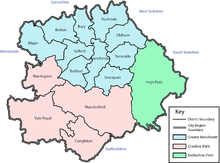 A map of the Manchester City Region as it was defined in 2004.

Between the publication of the Moving Forward: The Northern Way in 2004, through to the 2009 structural changes to local government in England, the Manchester City Region encompassed fifteen local government districts: the cities of Manchester and Salford plus the adjoining metropolitan boroughs of Stockport, Tameside and Trafford to the south and Bolton, Bury, Oldham, Rochdale and Wigan to the north, together with High Peak, Warrington and the former boroughs of Congleton, Macclesfield and Vale Royal.[3] The inclusion of these five areas added 656,355 inhabitants to the 2,562,200 already in Greater Manchester creating a city region of 3,218,555 using figures from the United Kingdom Census 2001.[8]

Since the 2009 structural changes to local government in England, the Association of Greater Manchester Authorities has used the term 'Manchester City Region' as a synonym for Greater Manchester, describing it as "a highly coherent single economic region", with reference to the "ten districts of the city region".[7] AGMA have published that in their literature "‘Manchester’ and ‘city region’ are used to refer to Greater Manchester, which is the ten local authority Districts of Bolton, Bury, Oldham, Manchester, Rochdale, Stockport, Salford, Tameside, Trafford and Wigan".[9]

The Greater Manchester Statutory City Region was announced in the 2009 United Kingdom Budget as one of two such pilot city regions in the UK (the other being the Leeds City Region).[10] Once created, it saw the ten metropolitan borough councils of Greater Manchester banding together as a combined authority to pool resources over skills, housing, transport and economic development, in exchange for greater powers from the UK central government.[11]