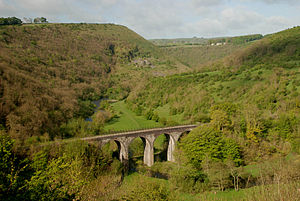 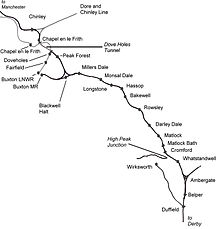 Sketchmap of the Manchester, Buxton, Matlock and Midland Railway and connections 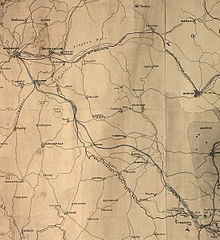 Fragment of a map showing the proposed route of the line. Notice the route through the Goyt Valley. Also the north-facing junction at Ambergate

The various routes followed by the Midland into Manchester

The Manchester, Buxton, Matlock and Midland Junction Railway ran from a junction with the Midland Railway at Ambergate to Rowsley north of Matlock and thence to Buxton.

In time it would become part of the Midland Railway's main line between London and Manchester, but it was initially planned as a route from Manchester to the East of England, via the proposed Ambergate, Nottingham, Boston and Eastern Junction Railway which would meet it a little further north along the North Midland line at Ambergate. The Act for a line from just south of Stockport to Ambergate was passed in 1846.

The initial plan was for the line to proceed from Ambergate where the ANB&EJR terminated, through Matlock and Buxton to a junction with the Manchester and Birmingham Railway just south of Stockport which would allow it to run into Manchester. It received Parliamentary Assent in 1846.

The line opened as far as Rowsley in 1849, but went no further, having run out of money [1] giving its promoters something of a problem.

Matlock Bath had long been a tourist town. Since the station at Ambergate had been opened, tourists had been brought in by coach and canal. Around thirty coaches had passed that way each day, with sixty or seventy thousand visitors going on to Chatsworth House.[2] The aim then was to develop the trade further.

The Midland Railway had held shares in the line since it had been first proposed in 1845, its interest being an extension onto its route to London. The Manchester and Birmingham had for some time been looking for a route of its own, and had considered a line through the Churnet Valley (later built by the North Staffordshire Railway), but had instead supported the alternative Matlock route with a substantial shereholding. However in 1846 it had merged with other lines to become the LNWR, which clearly could not contemplate a competing London line. In 1852 the two companies agreed to lease the line jointly for 19 years, In addition, the Midland would work the line and pay a rent on it, and also take over the Cromford Canal.[2]

In 1853, a junction was made to the southern end of the Cromford and High Peak Railway now LNWR-owned, at High Peak Junction, and with the latter's support, the Stockport, Disley and Whaley Bridge Railway connected Manchester to the northern end. In 1857, with the LNWR's barely concealed support, the SD&WBR then gained permission to extend to Buxton. It did so by a roundabout route along a massive escarpment to the east of the Goyt Valley, such that it could never become a through express route. Nevertheless, in 1860, the Midland gained permission to build a line from Rowsley to meet it at Buxton.[2]

It was the first time the Midland had built in such difficult terrain, with steep hills and deep valleys, Buxton itself being some 1000 feet above sea level. The line followed the River Wye as far as Bakewell, with the complication of the cut and cover Haddon Tunnel, and reached Hassop in 1862 There then followed two viaducts - at Millers Dale and Monsal Dale - and eight tunnels, reaching Buxton in 1863[1] at almost the same time as the LNWR reached it from Whaley Bridge.

All this time passengers were having to change at Ambergate, but in the same year, the Midland added a south-facing junction and moved the station to allow through travel from Derby and the south.[3] However, there was still the problem of the joint control of the line.

For many years, the town of Wirksworth had been campaigning for a branch line from Duffield. The CH&PR was interested, but had insufficient funds. The Midland was initially unenthusiastic, but then realised that the branch could be extended to Rowsley, avoiding the section to Ambergate, being unsure about what might occur when joint lease expired in 1871.[4]

However, the LNWR gave up its share of the line when the lease expired. It was, after all, remote and isolated from the company's main system. The Midland was therefore relieved of the necessity of extending from Wirksworth over a very difficult piece of terrain. The branch opened to Wirksworth in 1867 but was not carried further.

In the shifting alliances and rivalries between the various companies, the Manchester, Sheffield and Lincolnshire Railway also wished to keep the Midland away from the coalmines which it served and, in 1859, was planning a line from Hyde just outside Manchester to New Mills and Hayfield. The company was also being courted by the GNR that planned to run London trains through Retford. Meanwhile the MS&LR's manager Edward Watkin had his own plans to reach London through Sheffield.

It seemed the Midland's only chance was a circuitous route with the help of the Lancashire and Yorkshire Railway, except that it transpired that latter had an agreement with the LNWR not to handle other companies' trains. In 1861, the MIdland sent their manager James Allport and some of the directors on a scouting trip around the area, and came by chance upon a party of MS&LR directors riding in a dog cart. The upshot was that Allport who had previously worked for the latter company should arrange a deal. Since it was clear that the Midland was determined to go ahead, it would be better not to have two lines running side by side. [2]

It was agreed therefore that the Midland would join the MS&LR's line at New Mills, an agreement which was formalised as the Sheffield and Midland Railway Companies' Committee in the "Manchester, Sheffield and Lincolnshire Railway Act" of 6th August 1872. [5]

To do this, it built a junction at Millers Dale, which effectively left Buxton on a branch. Thus railway politics deprived the largest town in the Peak District (particularly at that time) without a through main-line station. The Midland's line proceeded to the east of, but parallel to, the LNWR's line until it reached a summit at Peak Forest. It then plunged under the LNWR through Dove Holes Tunnel with stations at Chapel-en-le-Frith, Buxworth and Chinley joining the MS&LR at New Mills to run into Manchester London Road, opening in 1867.

The Midland at last had its route into Manchester from London. Over the years it made some improvements. The route from Romiley through Hyde entailed a long detour, so in 1875 a new more direct line was opened through Reddish.

In 1865 the Midland had become a partner of the Cheshire Lines Committee which opened Manchester Central railway station in 1880. Therefore the MIdland transferred most of its trains there, at first reaching it through Stockport Tiviot Dale. However the route became increasingly congested and was hardly suitable as an express route, so in 1897, the Midalnd opened a new line from New Mills through Disley Tunnel and Heaton Mersey.[6]

The line from Matlock to Buxton was closed in 1968 by the Labour Minister for Transport, Barbara Castle, not as it is often thought by the Beeching reforms. Continuing support is being given by a heritage group Peak Rail who have restored the section from Matlock to Rowsley. The line from Matlock to Ambergate, plus the section of the Midland Main Line to Derby, are now referred to as the Derwent Valley Line. Meanwhile, the Wirksworth branch still exists and is currently being restored as the Ecclesbourne Valley Railway.

Although the track has been lifted between Rowsley and Buxton and is now part of the Monsal Trail, plans to re-open it are still proposed from time to time, and the Derbyshire County Council has pledged to keep the trackbed free of development.[7]

Part of the line has been re-opened by the heritage railway organisation Peak Rail who run services from near Matlock to Rowsley.

There are plans to extend to Bakewell via a proposed Rowsley North railway station as part of the Buxton extension project. It will involve reinstating the whole section and Bakewell railway station to their former use once planning permission has been granted, plus full restoration of the old Haddon Tunnel and Coombs Road Viaduct (along the way between both Bakewell and the proposed "Rowsley North").

Four tunnels (Headstone, Cressbrook, Litton and Chee Tor) were opened to walkers and cyclists in May 2011 [8]